Elswick plays strong at the plate 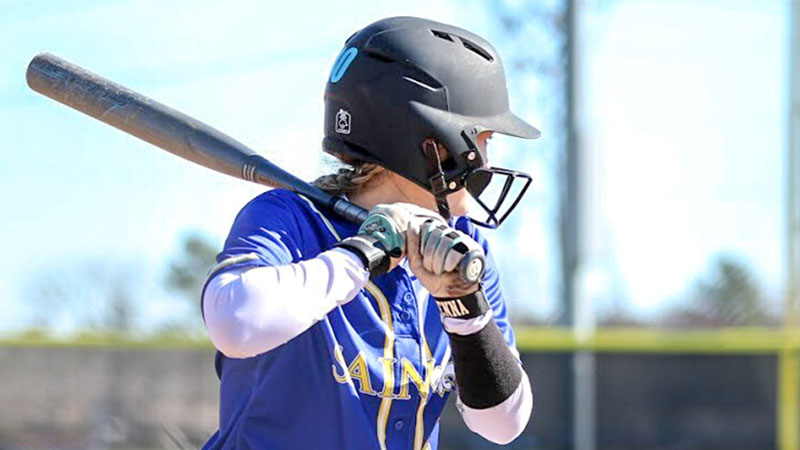 Jenna Elswick was voted Suffolk News-Herald Player of the Week after going 2-for-3 with a home run in a win for Nansemond-Suffolk Academy. (submitted photo)

Jenna Elswick was voted Suffolk News-Herald Player of the Week after going 2-for-3 with a home run in a win for Nansemond-Suffolk Academy’s softball team.

Through 12 games in the season, the Lady Saints have already secured some quality results, including a 3-2 win over Fuqua School, the reigning Virginia Independent Schools Athletic Association Division III state champions.

“We knew that they were going to be good competition,” Elswick said. “I felt like I had a really good game to help my team win.”

So far, Elswick has felt good about how her season has gone, as the sophomore has been able to step up her game from last season. Her goal over the summer was to work harder to improve on her performance at the plate. Her home run against Fuqua, which was her first for NSA, has shown the progress she has made in her hitting.

“That home run felt great because it was my first home run in school ball,” she said. “It gave me a lot more confidence for the rest of the season. It showed what I had been working on was starting to pay off.”

Elswick hopes her success will lead to an All-Conference selection, and she wants to get a head start on her recruiting process as she aims to play softball in college. She is motivated by helping her team and putting it in position to win games, and by the desire to play at the collegiate level.

“They all got a chance to play softball at a school they love,” Elswick said. “That’s where I am trying to get to.”

At 11-1, things are going well for NSA. The Lady Saints won nine straight before losing their only game. Having come close to a state title the past few seasons, they hope to win one this season, and Elswick believes they can.

“We really enjoy playing together,” she said. “Even though we are a young team, we have a lot of travel ball experience, so we are using to playing in big-time situations.”