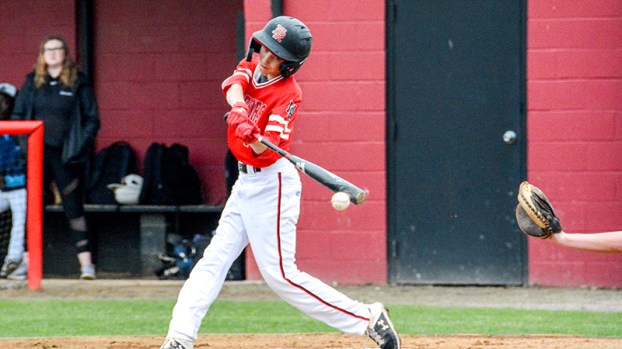 Ayden Stuffel had a double in the Warriors’ first loss of the season. The Warriors went into spring break 9-1. (Melissa Glover Photo)

The Nansemond River High School baseball team took its first loss of the season last Friday in a matchup with Hickory High School.

The Warriors went to 9-1 before spring break after a 2-1 loss to a tough Hickory High School team. Hickory jumped out to a 1-0 lead after two innings, with Nansemond River eventually getting on the board to tie the game up in the fifth inning. That very same inning, Hickory scored their second run of the game, which proved to get them over the hump for the win.

Tristian Williams and Gavin Gregory handled pitching duties for the Warriors, with Williams taking the loss on the mound. Bryson Dansberry had two of the Warriors four hits as a team. He also added a double.

At 9-1, Nansemond River has gotten off to a surprisingly strong start as most all schools in the South Hampton Roads area head into spring break. They were close to finishing 10-0 at the break and have beaten some very good teams throughout their schedule.

The Warriors will compete in South Carolina during their annual spring break tournament as they’ll continue to build chemistry and improve before coming back and competing in the district play once again.

Saints No. 5 in weekly poll

The Nansemond-Suffolk Academy baseball team came in at No. 5 on the weekly Virginia Independent Schools Athletic Association poll. The... read more