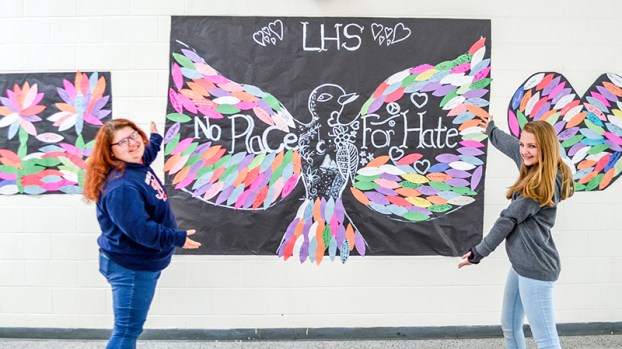 ‘Good vibes only’ at Lakeland

In the face of negativity, students at Lakeland High School took it upon themselves to bring positivity back to the hallways.

The school’s Gay-Straight Alliance Club worked in collaboration with the art and science departments to create the Wall of Kindness. These murals have brightened the hallway since they were finished on April 4.

Hundreds of paper petals have shaped the flowers, decorated the dove and filled the heart on the wall. Each petal has a positive message written on it by a student. A few of them say “be friendly,” “you are amazing” and “only I can choose my life. No one can do it for me.”

“Be kind, even when you’re not having the best days,” said Alexis Patrick, 15, a Lakeland sophomore and one of the GSA Club members that spearheaded the project. “Always spread kindness, because when you spread kindness it always comes back to you in like the best ways.”

This marks the third year that the GSA Club has been active at Lakeland. It was the first such club in Suffolk, according to Lakeland science teacher and club sponsor Teri Sheffield.

The students meet for a few hours every two weeks in Sheffield’s classroom. There are no requirements to be in the club. It’s a safe space for anyone, whether they identify as LGBTQ or they want to be “allies,” like Patrick and Alexis Townsend, her fellow sophomore that also pushed for the Wall of Kindness.

Sheffield admitted that it’s been a challenge to operate this club in Suffolk, where there hasn’t been an openness to members of the LGTBQ community.

“Since the inception of the Gay Straight Alliance, there’s a lot of negativity that’s been faced with the club,” she said. “It’s even more critical to have a safe space for these students to talk about anything, and to have that pressure released just for a little bit and know that it’s not going to go anywhere past this room.”

For Patrick, being an “ally” means helping others in need, just like how others in the club have helped her in the past few years.

“Being in the GSA has helped a lot, (especially) when I’ve been going through my struggles,” she said. “When one of my best friends committed suicide, they were here for me. They were here for me when I was depressed and I was crying. They’ve been there for me for a lot of rough times. They’ve helped me get through a lot.”

They found their inspiration for the Wall of Kindness on Pinterest. Sheffield showed the girls an image of a dove that had a quote of kindness on each feather. They wanted to bring that to Lakeland, but they were going to need help.

Their murals ended up being a six-week project. Black bulletin paper was used for the mural shapes and dove’s backdrop, and the art department painted the dove’s striking image.  It then took 10 people to cut 500 petals out of different colors of construction paper.

“We had a call for assistance, and there was about 10 people that day,” Sheffield said. “We were cutting machines.”

These petals were then distributed to science classes over the course of two days. Lakeland responded in force with 400 written messages in about a week.

Townsend added her own to the collection: “good vibes only” and “you’re your own kind of beautiful.”

“It’s pretty awesome that everyone has something different about them,” Townsend said.

The school has responded well to the art since April 4. Students and faculty have praised the project, and both Townsend and Patrick have every reason to be proud of their efforts. It’s put smiles on both of their faces, as well.

“When I’m upset or when I’m not in the greatest mood, I just look at it and it immediately puts me in a good mood,” Patrick said. “It immediately lifts my mood and I’m immediately happy and I feel better — to the point where I’m like giddy.”

This won’t stop bullying in the school or make students’ problems disappear. But it’s a nice reminder that there are still “good vibes” at Lakeland.

“Students are under so much pressure, so to have (these) messages (be) a collaborative effort from students just makes my heart so happy,” Sheffield said. “To know that these ladies were part of this great project and really spearheaded putting it together is fantastic.

“Having a school collaborative effort shows that in the midst of a lot of negativity, we can really show some positivity at Lakeland.”

TCC student to head to China

Suffolk resident and Tidewater Community College student Opal Lewis will travel to China with other students across the United States... read more