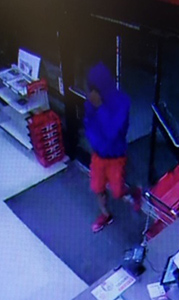 Police are seeking this suspect in a Monday night robbery at a convenience store. (Submitted Image)

Suffolk Police are investigating an armed robbery that happened Monday night.
The robbery was reported at 10:22 p.m. at the 7-Eleven in the 6400 block of Hampton Roads Parkway, according to a city press release.
Preliminary investigation found that a young, black male entered the business, displayed a handgun and demanded money, the press release stated. He fled on foot with an undetermined amount of cash. There were no injuries.
He was described as wearing a blue hoodie over his head with the drawstring pulled tight to cover his face, red shorts, and red shoes.
Anyone with information is asked to contact Crime Line at 1-888-LOCK-U-UP. Tipsters can also submit tips by going to www.p3tips.com or by visiting the Suffolk Police Department website at www.suffolkva.us/spd and looking for the Suffolk Crime Line link. Tipsters never have to give their names or appear in court and may be eligible for a reward of up to $1,000.