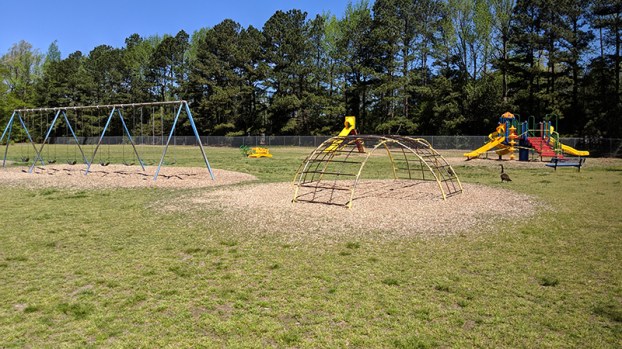 Elephant’s Fork Elementary School’s playground would be the first in line for upgrades with about $68,000 proposed in the Suffolk School Board’s 2019-2020 budget.

Though all of Suffolk’s public elementary schools have playgrounds, they are not all equal, and many need upgrades, according to Suffolk Public Schools’ Facilities and Planning Director Terry Napier.

“We want to try to do something about that at our earliest convenience,” Napier told the School Board at its April 11 meeting.

Some of the things the Facilities and Planning Department has already looked at include the age of the equipment at all of the schools, the size of the playground versus how many students attend each school, and safety issues identified by department and school staff. Some of the playgrounds, he said, are as old as the buildings themselves.

Other playground issues, according to Napier, include the peeling of protective coating, cracks and splits in the slides, the slides holding water and missing post caps.

For the past few months, Suffolk Public Schools staff, according to Napier, has been replacing hardware, which includes the replacing of swing seats.

Napier said work began last week on a $33,000 purchase order with Miracle Recreation, which is going to three of the schools’ playgrounds to perform work that the school division is not able to do.
Napier also noted that at all but Florence Bowser Elementary School, none of the schools has inclusive playgrounds — meaning they can be accessed by children with disabilities — and he wants to do something about that.

“I’m not going to say they’ll be totally inclusive, but we want to include at least one piece of equipment at every playground,” Napier said. “There’s a lot of discussions these days about inclusive playgrounds, and I am certainly no expert in that area, but we want to do what we can do in that regard.”

“Elephant’s Fork, Kilby and Nansemond, those are the three oldest elementary schools that we have in service, so it makes sense there,” Napier said. Noting Booker T. Washington’s school renovation in the mid-to-late 1990s, he said that playground was already there, “so I’m counting that in as one of the older playgrounds.”

Mack Benn Jr. received equipment from schools that had closed, and while that helped at the time, Napier said, it didn’t go far enough. The Northern Shores work, Napier said, would depend on the outcomes of an inclusive playground project proposed there.

He estimated a $250,000 cost per playground, on average, to make changes, but Napier said that could change depending on each playground’s unique needs.

“No dates have been assigned for these, because we have no funding yet,” Napier said.

He said the Facility and Planning Department has applied for two playground grants to help with the upgrades. Other potential funding sources include the Capital Improvements Program and Plan, operating funds and grant funding.

“We would like to move forward as soon as possible on these playground upgrades,” Napier said.

The 2019-2020 budget the School Board passed includes about $68,000 for playground upgrades at Elephant’s Fork, noted Superintendent Dr. Deran Whitney.

School Board member Sherri Story said she was pleased to hear about more inclusive playgrounds but expressed concerns about asphalt surfaces at playgrounds. She also said she would like to see security cameras pointed toward the playgrounds.