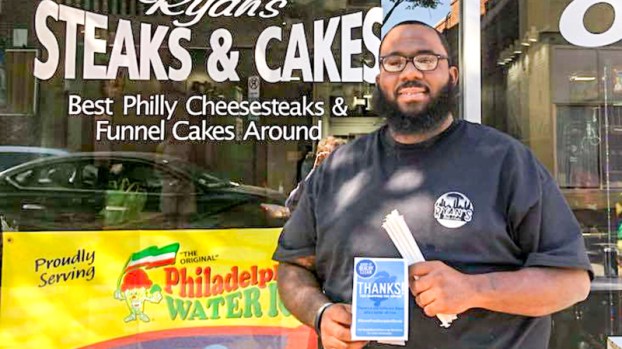 Skip the straws, save the turtles

Suffolk restaurants are working with Keep Suffolk Beautiful to ditch the straw in support of a “Straw-Free Earth Day” this Monday.

Sponsored by Keep It Beachy Clean and askHRgreen, this campaign is encouraging Hampton Roads restaurateurs to serve their drinks without the ubiquitous — and environmentally hazardous — single-use plastic straw while raising awareness about their environmental risks.

The Ocean Conservancy ranked them among the top 10 most littered items, alongside plastic lids, take-out containers and bags.

“We collect a huge amount of straws at volunteer cleanup events, and we welcome the support of local restaurants to help keep our community clean,” Kathy Russell, chairwoman of Keep Suffolk Beautiful, stated in an April 11 press release.

Keep Suffolk Beautiful has been leading the charge to get local restaurants to sign up, use paper straws instead of plastic and share information about Straw-Free Earth Day with customers. As of Wednesday, more than a half-dozen restaurants have signed up.

The Plaid Turnip on North Main Street has already switched to paper straws and is recognized as a “straw conscious” restaurant, according to the press release.

“We are happy to make such a simple change that can have such a big impact,” Ed Beardsley, owner of the Plaid Turnip, stated in the press release. “We proudly support making changes to protect and preserve our beaches, waterways and their inhabitants.”

Plastic straws are made of a material that’s designed to last for decades, but are generally only used for less than 30 minutes before being tossed aside, according to Christina Trapani, program manager for the Keep It Beachy Clean Program.

In addition to restaurants, Trapani encouraged individuals to opt out of straws as well. Individuals can make an online pledge at keepitbeachyclean.org/strawfree/straw-free-pledge, let servers know they don’t want a straw or bring their own reusable sippers to restaurants.

“Straws that enter our waterways can break up into smaller pieces over time, persisting for years, endangering sea turtles, birds and other marine life that can mistake them for food,” Trapani stated in the press release.

The dangers of the plastic-straw problem hit home for Ryan Byrd, owner of Ryan’s Steaks and Cakes, when he saw a video online of researchers removing one of these straws from a sea turtle’s nose. The video is a graphic illustration of how this simple litter can harm marine life.

“It really made me more aware of what a little plastic straw can do in the ocean,” Byrd said.

Restaurants were able to obtain window clings, tabletop signs and social media graphics to inform their customers, along with informational cards for their tables and menus. Each Suffolk restaurant also received a sample of at least 100 paper straws, according to Wayne Jones of Keep Suffolk Beautiful.

Byrd and several other restaurant owners have committed to using paper straws beyond Earth Day, as well.

“With something as simple as a straw, it’s the least I can do,” Byrd said.

While paper straws are a better alternative to plastic, the best option for restaurants is to have a straws-on-request policy and to spread the word and reduce this litter.

“Saying ‘no’ to plastic straws, utensils, grocery bags, coffee stirrers and polystyrene to-go containers may be the single most important thing you can do to reduce plastic in our oceans, litter on our streets, dangers to wildlife and landfills filled to the brim,” Katie Cullipher, who oversees askHRgreen.org, stated in the press release.

Contact Keep Suffolk Beautiful at 514-7604 or littercontrol@suffolkva.us for more information, or visit keepitbeachyclean.org or askHRgreen.org.