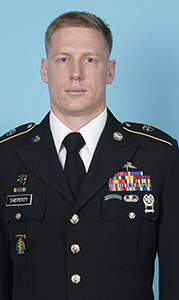 The West Virginia Army National Guard has identified the soldier who died in a parachuting accident in Suffolk on Wednesday as Sgt. 1st Class Nicholas Sheperty.

Sheperty, 36, was assigned to the 2nd Battalion, 19th Special Forces Group (Airborne), out of Kingwood, W.Va.

Maj. Gen. James Hoyer, the adjutant general of the West Virginia National Guard, made the announcement in a press conference on Thursday. Sheperty died during training Wednesday afternoon at the Suffolk Executive Airport. He was pronounced dead on the scene.

Sheperty was a member of the elite Green Berets and served as a senior weapons sergeant within his unit. He joined the West Virginia Army National Guard in 2010. Prior to that, he served with the U.S. Marine Corps Special Operations Command after enlisting in 2002 and serving multiple tours in Iraq and Afghanistan.

He was the recipient of the Purple Heart, Bronze Star, Navy/Marine Corps Combat Action Ribbon and NATO medal among numerous other awards and decorations, according to a press release from the West Virginia Army National Guard.

He was a resident of Baltimore, Md., and a native Virginian. Maj. Holli Nelson, state public affairs officer for the West Virginia National Guard, said she was not sure where in Virginia he is from.

“This is an extremely sad day for West Virginia,” said Gov. Jim Justice. “We owe everything we have to the men and women who step up and make sacrifices to protect our country’s freedom.”

Hoyer said during Thursday’s press conference that Wednesday’s accident happened during routine training exercises for the military freefall team. He said an investigation to determine the cause is ongoing. “We won’t know until the investigation is complete,” he said.

Despite not being a resident of West Virginia, Sheperty was drawn to its National Guard because of its “reputation of having some of the best special forces soldiers in the United States military,” Hoyer said.

He noted Sheperty’s personality as well as courage and commitment.

“Nick was happy, he was gregarious. He was a great guy who didn’t have to serve, because he’d already done his service,” Hoyer said. “This should be, I think, a reminder to all of us about the sacrifice that a small group of people in this nation make … and the tremendous sacrifice that some of our families make.”

Hoyer added that Sheperty had willingly chosen a particularly dangerous subset of a dangerous occupation out of his devotion to serving his country.

“It’s dangerous just being in the military, but to be a member of a special forces unit and a high altitude parachutist is exceptionally dangerous business,” Hoyer said. “Those guys do it knowingly and willingly, because they believe it’s in the best interest of their family and their country.”

Hoyer said many have asked what they can do for Sheperty’s family, and his response was this:

“Nick Sheperty lived the Army values in a world and a country that has lost its focus on values,” he said, noting the Army values are loyalty, duty, respect, selfless service, honor, integrity and personal courage. “He lived those every day, even well beyond what his obligation was to his country. My response to folks was to go out and live the Army values. Make this country just a little bit better than it was yesterday.”

Hoyer added his “debt of gratitude to the men and women of the Suffolk emergency response for their professionalism during the efforts to try to keep Nick alive.”

Though all of Suffolk’s public elementary schools have playgrounds, they are not all equal, and many need upgrades, according to... read more