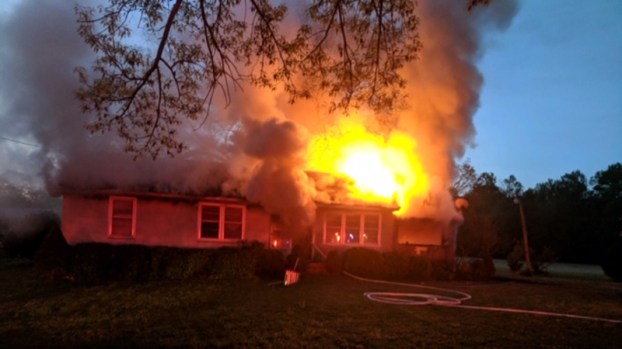 A two-alarm fire on Arthur Drive has injured one occupant and one firefighter on Thursday morning. (City of Suffolk photo)

UPDATE: The fire was called under control at 8:03 a.m., according to a city press release.

Two adults resided at the residence and have been displaced, as the home was declared a total loss. The resident transported for further medical evaluation was an adult male.

Earlier: An occupant and firefighter are being treated after suffering injuries in an early-morning fire on Thursday.

Heavy fire was showing from the single-story residence when firefighters first arrived, the press release stated.

One occupant was treated and then taken to a local hospital due to smoke inhalation, the press release stated. One firefighter has also been treated due to heat exhaustion.

The roadway remains closed in the area due to the staging of equipment.

Firefighters are still working the scene, and more information will be provided later.

Though all of Suffolk’s public elementary schools have playgrounds, they are not all equal, and many need upgrades, according to... read more