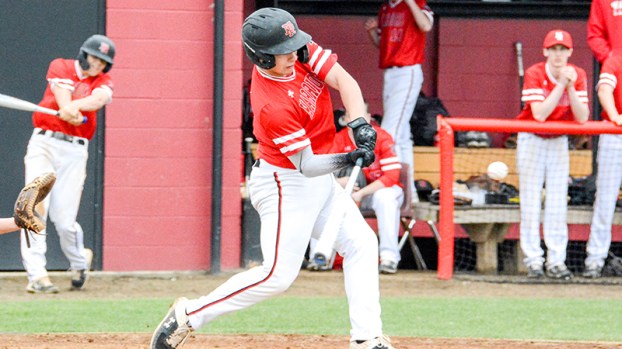 Nick Arnold hit a grand slam for Nansemond River while the Warriors were in South Carolina. They head out of the break with a 10-2 record. (Melissa Glover photo)

The Nansemond River High School baseball team took its annual trip to South Carolina, which is always a valued experience.

The Warriors (10-2) head into the second half of their season feeling good about where they are, having played some good competition while also bonding as a team. It’s an experience Coach Mark Stuffel described as valuable for his team every year that they go there.

“Anytime you can get away as a team (it) brings us close together,” Stuffel said. “I feel like that’s always good for us and it’s fun.”

Nansemond River saw quality teams in the Hanahan Invitational Tournament during which it dropped a game to Summerville High School (S.C.), but picked up a win against Travelers Rest School (S.C.), finishing 1-1 in South Carolina.

“We were able to come back 1-1 and enjoyed ourselves a lot,” Stuffel. “In the game we did lose, we didn’t play great, but we didn’t play bad either. They were just a better team. However, I was happy with the way these guys were able to bounce back.”

Though some have been surprised by the Warriors’ strong start to the season, Stuffel reminds himself and his team that strong starts don’t mean much if they can’t finish strong as well.

“We started pretty decent last year and finished 13-7 and missed out on the playoffs,” Stuffel said. “So, until we get to a point where we feel like we’re good to go for the playoffs, we have work to do.”

The Warriors may be young, but they have been getting strong production throughout the lineup. Bryson Dansberry has been strong at the plate for the Warriors, while Nick Arnold has played well at catcher. Caleb Pittman and Ben Grady have also played at a high level.

The Warriors, having beaten some good teams in the first half of the season, will face those teams again. Stuffel believes they’re ready.

“This is a group of competitive guys,” Stuffel said. “We know what to expect, and I feel like these guys are ready.”