Full speed ahead at port 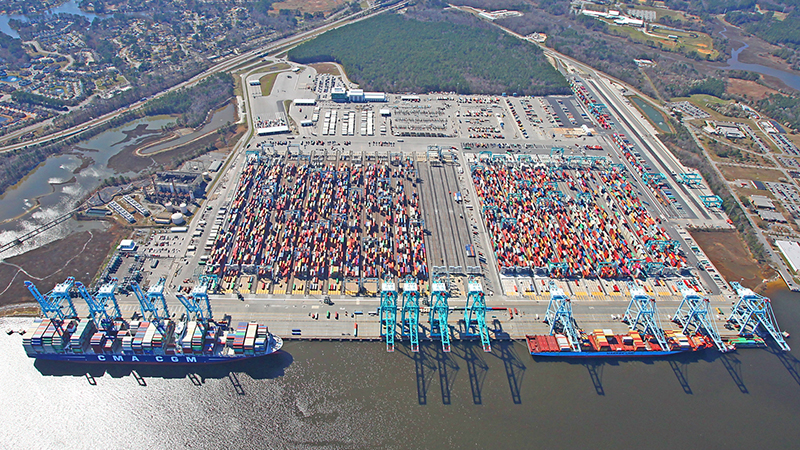 The Port of Virginia has achieved another record-setting year of productivity that has helped embolden the economy of Virginia, with capacity for even greater strides moving towards completion, according to Virginia Port Authority Chief Executive Officer and Executive Director John Reinhart.

Reinhart delivered the annual State of the Port address last week at Hilton Norfolk The Main hotel, as well as in Front Royal and Richmond. The presentation showed port users, partners and stakeholders the port’s performance over the past year, along with what’s on the horizon.

“We are starting to come into our own,” Reinhart said at the Norfolk presentation on April 11. “We have room to grow, and we can be more aggressive. We’re driving productivity.”

The port marked the one-year anniversary in March of its Truck Reservation System, which has helped to reduce turn times for motor carriers at Norfolk International Terminals and Virginia International Gateway in Portsmouth. In the past month, 85 percent of all truck moves were done in 60 minutes or less.

Furthermore, the port recently completed the USDA Cold-Treatment pilot program and is increasing its capacity for refrigerated cargo by 66 percent.

The Norfolk Harbor and Channels Deepening Project — the port’s $350 million “Wider, Deeper, Safer” initiative — received federal approval to begin dredging and make Virginia home to the deepest and safest port on the East Coast, according to the port’s 2018 sustainability report.

Reinhart said at the April 11 presentation that the College of William & Mary will redo its previous, comprehensive study of the port and maritime industries’ economic impact on Virginia. This new report will use the port’s results from fiscal year 2018, and an update on that report is expected later this fall.

“We are a catalyst for commerce, (and) I think over the last five years the commonwealth of Virginia is getting its game on,” Reinhart said.

More than 160 port-related business announcements have occurred in the past four years, with nearly $4 billion invested and more than 15,000 jobs created throughout Virginia.

According to the port’s year-to-date fiscal year 2019 figures, 37 businesses have announced that they were locating or expanding their business in Virginia. More than 2.3 million square feet of space has either been built or is under development, representing more than $920 million invested and more than2,400 jobs created statewide.

One of the beneficial cargo owners in Suffolk is Target, which has invested another $2.25 million into its upstream distribution center on Manning Road, adding 225 new jobs to the facility.

After two-and-a-half years of work, the port is nearly finished with its $320 million expansion project to increase the capacity and efficiency of Virginia International Gateway.

According to a Monday press release, the port is less than two months away from finishing construction at Virginia International Gateway. To date, 13 new container stacks serviced by 26 new rail-mounted gantry cranes have been delivered. Four new ship-to-shore cranes were placed into service in the past two weeks — now the largest in the United States.

This project was undertaken to double the rail service and stack capacity of Virginia International Gateway, extend its berth and add four additional truck gates.

Progress is also being made at Norfolk International Terminals’ south container stack-yard. Twelve of 30 new container stacks have been delivered, and the project’s second phase is set for delivery in September. All construction is expected to be completed by late 2020, according to the press release.

“We’re on a good trajectory,” Reinhart said on April 11. “With all the capacity that we’re building, this is only going to get quicker, because Virginia is a good place to do business.”

Saints help others with Day of Caring