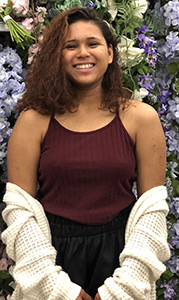 Myasia Pareno was voted Suffolk News-Herald Player of the Week after a hat trick in a big win for the Lakeland High School girls’ soccer team.

Through the first half of the season, the Lakeland girls’ soccer team has gotten off to a very good start. At 4-2 the team is playing well and continues to get better. What’s even more impressive about the Lady Cavs is that against their fellow region opponents, they have competed well. Their most recent region opponent was Booker T. Washington High School, against which Lakeland picked up a 6-1 win. That game, Pareno had a hat trick.

“I feel good about that performance, but there were also some mistakes I made,” the junior Lady Cav said. “I just had to pick my head up and keep going. Overall, I was happy with the way we were able to compete and get the win.”

Going into the game, she felt like she was going to have a good game defensively, but once she was moved to the offense, she wanted to take advantage of her opportunities.

The junior feels like her game has progressed since last season. She plays different positions for Lakeland, which speaks to how versatile she is. She enjoys playing wherever she is needed in order to help the team, but she prides herself most on her defense. Her teammates giving their all is what motivates her on the field.

“It’s good to be versatile,” she said. “But I definitely pride myself on being a good defender.”

Her mother also inspires her. She said watching her mother work hard for her and her siblings to have opportunities is something she is forever grateful for.

Coming into this season, one of Pareno’s goals was to score a goal. Now that she’s done that, next is continuing to work on her goal kicks throughout the second half of the season.

Lakeland gets back at it Monday with a matchup with Deep Creek. Pareno and the rest of her teammates are excited to see how the season concludes.