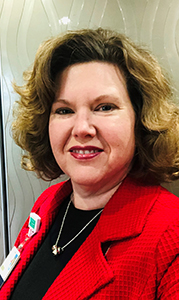 Jackson is currently a director of patient care services at Sentara Leigh Hospital in Norfolk. In this role, she is responsible for two acute care inpatient nursing units, an oncology unit and a clinical decision unit. She also is responsible for quality and safety, infection control and professional practice, which is the department responsible for maintaining Magnet status, a seal of excellence in nursing, which Sentara Obici Hospital also achieved in 2018.

Jackson is a board certified nurse executive and a champion for patient safety. In 2007, with grant support from the Robert Wood Johnson Foundation, she co-authored a professional paper on fall prevention. The paper, “Preventing Falls Step-by-Step,” appeared in Advance for Nursing magazine. Jackson also published her dissertation on pressure injury prevention in Ostomy Wound Management and serves as Sentara executive sponsor for the Clinical Appropriateness Pressure Injury Initiative across all 12 Sentara hospitals.

Jackson grew up in Suffolk and graduated from Nansemond-Suffolk Academy. Her parents and extended family currently live in Suffolk.

The Port of Virginia just had its second-busiest March in history, having processed 240,035 twenty-foot equivalent units of cargo, the... read more