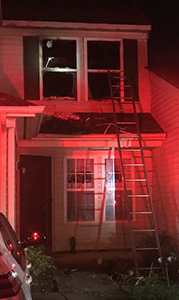 Two adults were displaced by a fire at their townhouse early Friday morning.

The fire in the 6300 block of Scottsfield Drive was reported at 1:46 a.m., according to a city press release. The first unit arrived on scene at 1:55 a.m.

Light smoke and fire were showing from the second floor when firefighters arrived. They were able to knock down the fire quickly and contain it to the room and its contents.

The pair of occupants was able to escape with their two dogs prior to the arrival of firefighters, the press release stated. They are being assisted by family.

The fire was called under control at 2:26 a.m., and there were no injuries.