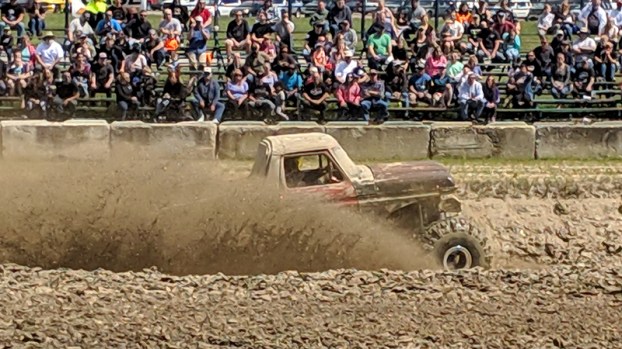 The fourth annual Suffolk Peanut Fest Mud Jam, after being postponed for a week, drew about 2,000 people to the Suffolk Executive Airport Saturday.

The fourth annual Suffolk Mud Jam gave the crowd of about 2,000 people a chance to see plenty of mud slingin’ and air catchin’ on a sunny Saturday at Suffolk Executive Airport.

Postponed from the previous Saturday due to weather, the event, held by Suffolk Festivals Inc. and Big Daddy Motorsports, also included a Classic Auto Cruise-In.

Trucks competed in five different weight classes, ranging from street class to unlimited class, while drivers were also able to test their vehicles in timed jump courses. In addition, there was a “Tuff Truck” challenge through an obstacle course and a freestyle session for more adventurous truck driving.

Attendees had a chance to meet the drivers and take a closer look at their trucks during an open “pit party” prior to the competition.

Bleachers were mostly full on both sides of the mud pit when spectators — some barefoot — weren’t sloshing through the mud and soggy grounds to get to and from the concessions. The trucks and cars competing gave the crowd plenty to cheer about — a few getting stuck in the mud, others struggling to get out of the pit and others still who seemed to glide through it.

Maddie Ebel, 21, of Smithfield, was at the event with her 2-year-old son, Axyl, and said they were enjoying the spectacle.

“I love it, and he loves it for the most part,” Maddie Ebel said. “I like the big noises and the fast trucks, and he likes the things splashing in the mud.”

Jacob Gray, 22, of Franklin was running a truck in the street class and was waiting to compete.

“I ain’t ever run out here before,” Gray said. “Me and my brother built the truck last week and we came out here to see what it’ll do.”

Daniel Staples and Amiee Childers made the hour drive from Yorktown after finding out about the event on Facebook. It was the first time for the two of them at this type of event, but both said they’d be back, and would bring friends. Their favorite part was seeing one of the trucks come out of the mud pit and nearly roll over, and another truck that had to get towed out of the pit.

Childers said she wanted to see all the trucks “hauling and slinging mud everywhere,” while for Staples, it was all about the trucks.

“I’m here to watch the trucks, no doubt about it,” Staples said.

Fred Robertson, stationed at Naval Air Station Oceana in Virginia Beach and originally from Wisconsin, said he came out because of boredom but was enjoying himself.

Most enjoyed seeing the trucks make their way through the mud.

Full speed ahead at port

The Port of Virginia has achieved another record-setting year of productivity that has helped embolden the economy of Virginia, with... read more