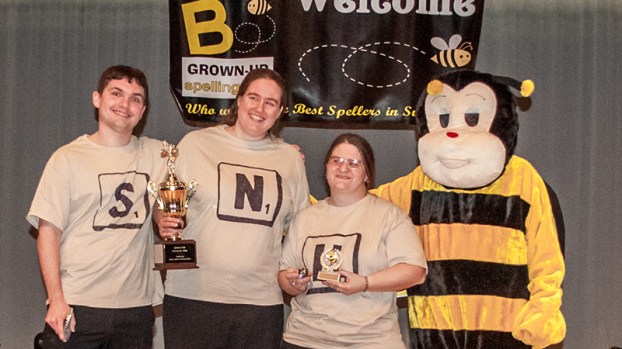 Last year, teams put on their best costumes to face some of the difficult words in Webster’s Dictionary. One by one, they were eliminated by the likes of “glockenspiel,” “ichthyology” and “bourgeois.”

It was the Typographical Airers, The Suffolk News-Herald’s team, that took the crown in last year’s Grown-Up Spelling Bee. The Queen Bee Sponsor team will defend its title when the Suffolk Education Foundation’s annual competition returns this May.

The third annual Grown-Up Spelling Bee will be held on May 18 beginning at 2 p.m. at King’s Fork High School. Teams of three adults each will work together to spell words and compete to become the “Best Spellers in Suffolk.”

According to an email from Suffolk Public Schools spokeswoman Bethanne Bradshaw, 11 teams have committed to the competition as of Tuesday. Teams include the Suffolk News-Herald, RRMM Architects, BayPort Credit Union, and the Superintendent’s Team.

Teams will work together on the KFHS stage to spell the words in front of a packed audience. They may use lifelines in case things get too difficult, with options such as a “stinger,” “fly-over” or “spell check.” Teams can only use one lifeline per round, and once only two teams remain, lifelines are no longer an option.

Teams are encouraged to wear costumes to the competition, and spectators will vote for the best team costume.

“Remember those elementary school spelling bees? This grown-up version is the F-U-N version, plus it’s now a team sport,” Bradshaw wrote in an email. “Plus, you get to dress up in silly costumes with two other grown-ups.”

Teams that wish to register must do so before May 1, and with a maximum of 18 teams for the competition, expect the buzz to fill up the remaining spots quick.

Tickets are $5 each, and admission is free for children ages 8 and younger. Contact Bethanne Bradshaw at 925-6752 for more information.

For the second time in a week, Suffolk Police are investigating a robbery at the same convenience store. Police were... read more