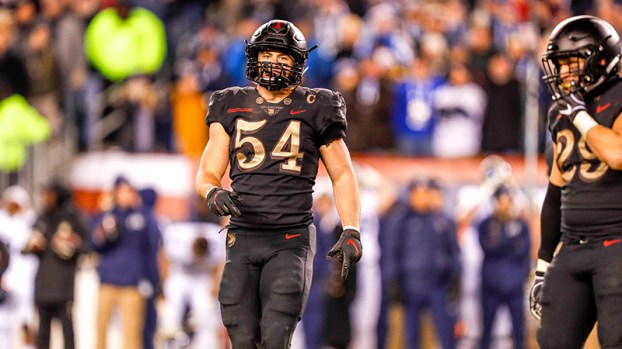 For the second year in a row, Suffolk native Cole Christiansen was selected a captain for the Army at West Point football team. (Army Photo)

Suffolk native Cole Christiansen recently was named one of three captains for Army football for the second consecutive year.

Last season, he was second on the team with 77 total tackles, including 42 solo shots. He also added 12 tackles for a loss of 24 yards and one sack for six yards. That was all while carrying a co-captain responsibility as a junior, something not many juniors throughout the program’s history have done.

In 2018, Army finished 11-2, a school record for number of wins. One of the goals Army wanted to achieve last season was to finish within the top 25 in the country, and they were able to do that, finishing at 19. The team had an impressive bowl victory over the University of Houston with a 70-14 win.

Christiansen believes his senior season can be an even better season for the team than last year. With a big senior season, Christiansen could have an opportunity to go pro. Though that would interest him, the Suffolk native has an obligation to serve the United States, and if a chance to play in the NFL interferes with his obligation, he’d gladly turn down the opportunity in order to serve.

Each season, Christiansen has been able to raise his level of production after starting his first full season as a sophomore, and this year should be no different. At NSA, he was a two-time state Defensive Player of the Year. He was also a state champion in 2015 and was a multiple All-Conference and All-State selection. In the conference, he also won multiple Player of the Year awards.

The Lady Saints took their second loss of the season in the Edenton Easter Softball Tournament championship Monday evening. The... read more