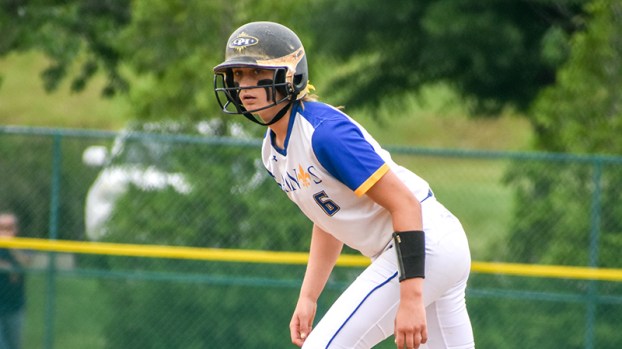 Addy Greene anticipates the next play on base for the Lady Saints. Nansemond-Suffolk Academy took its second loss of the season in a Easter softball tournament championship. (submitted photo)

The Lady Saints took their second loss of the season in the Edenton Easter Softball Tournament championship Monday evening.

The Nansemond-Suffolk Academy softball team took only its second loss of the season when they went down to North Carolina to finish out their Easter weekend tournament, after winning the first two games a combined 26-1.

Their first two wins led to a showdown with Camden County High School, in which the Lady Saints took a 2-0 loss. It was the first time this season the Lady Saints were shut out.

Reese Byrd handled pitching duties for the Lady Saints and while she struck out nine, she gave up four hits, which led to her first loss in the circle this season.

NSA only had three hits on the day and had four errors to Camden County’s zero.

The Lady Saints are set for a full slate of games this week and will take on Cape Henry Collegiate at home Thursday afternoon at 4:30 p.m.

The Nansemond River High School girls’ soccer team picked up its first win off of spring break on the road... read more