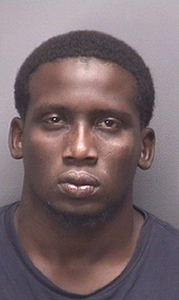 Man gets five years for assault

A Suffolk man was sentenced to five years in prison Wednesday on charges related to an August 2017 sexual assault.

Cary Tyrone McLaurin Jr., 27, received the sentence from Judge William R. Savage III in Suffolk Circuit Court on a charge of rape and a charge of attempted sodomy.

Last year, McLaurin entered Alford pleas — meaning he did not admit guilt but admitted the evidence was likely sufficient to find him guilty. Two additional charges were not prosecuted.

The nighttime attack happened on what’s known locally as “the cut” or “the cut-through,” a well-traveled foot path that leads from Greenfield Crescent, near a Carolina Road gas station, to several nearby neighborhoods.

The victim, a 33-year-old woman, told police she was walking home from work when a stranger attacked her on the path. He pushed her down, pulled her pants down and attempted to rape and sodomize her, she said. He got up and ran when he was interrupted by two men coming down the path.

Video from the gas station, shown in court Wednesday, showed the woman walking toward the path with a man close behind. It later records him running from the scene and the two men who interrupted the crime coming from the cut-through after they had helped the victim home. She immediately contacted police.

Senior Assistant Commonwealth’s Attorney Susan Walton said in court that the video corroborates the victim’s version of events. The video of the man running from the scene was released to the media, and a caller identified the man as McLaurin, Walton said. In addition, DNA evidence on the victim’s body matched McLaurin, according to court records, and the victim identified him in a photo lineup.

Walton said the victim’s story remained consistent throughout the process, while McLaurin’s story changed constantly. He first said he wasn’t there at all, then said he met the woman for a drug transaction. Next it was an offer of sex for money, and finally he said they were in a relationship.

None of those was the real story, Walton said.

McLaurin’s mother and brother, as well as a mentor, testified during Wednesday’s hearing. They said the man they know is a hard worker, a good son and a good father to his young daughter, who is now being cared for by his mother.

“He’s not a bad person,” said Andrea McLaurin, his mother. “I know I’m biased. But he’s a good father, a great son, a hard worker. He was working two jobs when this alleged incident happened.”

His brother, Anthony McLaurin, said there are two sides to every story. He said he had seen his brother with the victim in the past as if they were going together.

“He’s like the rock of the family,” Anthony McLaurin said. “He makes stuff happen. He makes sure his daughter and his family is secure.”

A report prepared for the sentencing procedure found that McLaurin had a high risk of re-offending after his release. He was convicted in 2017 of indecent exposure, a misdemeanor, outside of a Suffolk recreation center.

“We would be just as successful looking into a crystal ball as to whether Mr. McLaurin is going to re-offend,” he said.

Judge Savage sentenced McLaurin to an active sentence of five years with a number of restrictions after his release. For the first three months, he will be chaperoned everywhere he goes outside of his home, Savage ordered, and he will have a curfew from 7 p.m. to 5 a.m. for the first year.

Shannon Lee likes to say she gave birth to two babies 14 years ago — delivering her daughter Claire and,... read more