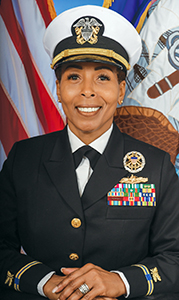 It was a heartwarming occasion that commemorated the Suffolk resident’s prestigious career — one filled with culinary excellence and landmark firsts.

“I didn’t feel like I was retiring,” Lawrence said. “It was a joyous occasion.”

A native of Port of Spain, Trinidad and Tobago, Lawrence and her family moved to the United States in 1976. She enlisted in the Navy in 1986, shortly after she graduated high school.

The professional, neat uniforms worn by military recruiters had caught her attention in high school — as well as the opportunity to be part of something greater, see the world and make something of herself, she wrote. She also knew that she had the discipline from home to succeed in the military.

“It was easy transitioning from our household into the military,” she said. Her sister Cheryl Morris — one of her nine siblings — retired from the Army in 2003 at the rank of master sergeant.

In 1986, she graduated from Navy Recruit Training Command in Orlando, Fla. She went on to earn the distinction of honor graduate at Mess Management Specialist “A” School, then immediately advanced to the rank of petty officer third class.

She served aboard USS Shenandoah from 1987 to 1988, and during her tour on the USS L.Y. Spear from 1988 to 1990 she earned both U.S. citizenship and the enlisted surface warfare specialist qualification. She also advanced to petty officer second class in that span and later reached petty officer first class aboard the USS Emory S. Land, on which she served from 1993 to 1996.

She was selected to be chief petty officer during her ashore assignment at Navy Recruiting Station Middletown in Connecticut from 1996 to 1999, and in 1999 she was notified of her selection for chief warrant officer. In 2000, she received her commission to chief warrant officer 2 and graduated from the Navy Supply Corps School in Georgia.

Her culinary specialties that she honed as a child supported her Navy successes, she wrote.

“At a very young age, we were required to know how to prepare certain type of foods,” she wrote. “By the time (we) were 16 years of age, we already knew how to cook, wash, iron and clean a house. Growing up came at an early age.”

Lawrence’s first assignment as a naval officer was as the food service officer aboard the USS Frank Cable from 2000 to 2002, during which she earned her surface warfare supply corps officer qualification. She then rose to chief warrant officer 3 during her 2002-to-2004 assignment as billeting officer and site director at Naval Station Norfolk.

She was assigned as the food service officer at then-Naval Amphibious Base in Little Creek from 2008 to 2011. The Joint Expeditionary Base Little Creek-Fort Story — the first joint base in Hampton Roads — was established on Oct. 1, 2009, and Lawrence served as supply officer for both bases. She also at this point had earned the rank of chief warrant officer 4.

“I believe I was setting a standard for our food service community,” she wrote. “That we are not just cooks. It takes more than just standing behind a grill flipping burgers or in front of a deep fat fryer.”

She attempted to show during her tenure that Navy food service is just as important as any other job in the Navy — and one that’s crucial for the entire organization.

“Food is the morale booster to every military organization,” she wrote. “We are customer service driven and make every effort to provide the best quality service globally.”

In 2013, she saw 16 Navy chefs compete at the annual Fort Lee Joint Culinary Competition, and from that she was inspired to help form a Navy culinary team. She and others wrote instruction that was approved and signed by the 47th Chief of the Supply Corps on Oct. 14, 2014, which established the Navy’s first official Navy Culinary Arts Team.

She led the team for five years. During her leadership, the team accumulated more than 100 medals at the Fort Lee competition and maintained second place from 2015 to 2017.

“That was major for the team and Navy food service during that year, (which was) my final year leading the team,” she wrote.

In June, Lawrence became the first female to assume the title and responsibilities of Senior Warrant Officer of the Navy, reaching a supply corps community food service milestone of highest excellence, according to the press release.

Lawrence didn’t even realize that was a possibility until she got the call that was she was next in line in February 2018.

“I was speechless for the first time,” she wrote. “I was lost for words. (I thought), ‘This could not be happening,’ (and) I asked, ‘Are you sure I am next? There isn’t someone else (more) senior than me?’”

But there was no mistake, and as realization set in, a tear rolled down her eye.

“I wished my mother was here to see and witness this,” she wrote. “I do not take any of this for granted at all. I am humble, grateful and pray that I have paved the way for others — that the path would be a little clearer for others to get through.”

The Suffolk Literacy Council will be able to update its tutor training program after receiving money and donations from several... read more