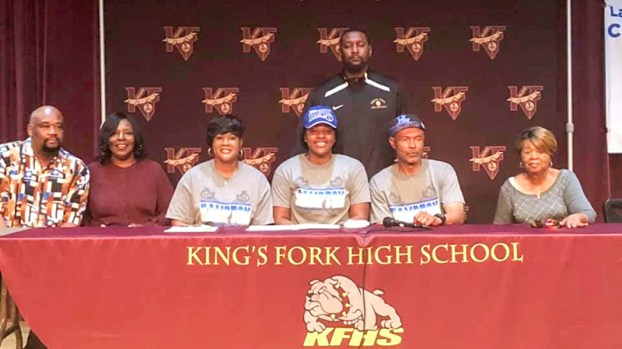 Nylah Young’s grandparents, Robert and Josephine Fields, her mother and stepfather, Tyra and Earl Ruffin, her other grandmother, Phyllis McCann, and Coach Maurice Fofana joined her for her official signing to Hampton University. (submitted photo)

Young will remain in Hampton Roads to play NCAA Division I basketball in Hampton. Back in February, Young committed to Hampton and officially signed in a ceremony at King’s Fork Wednesday afternoon.

Young finished up her senior campaign at King’s Fork with one of the best individual seasons in the school’s history. This season, she surpassed 1,000 career points while also leading the area in scoring with 27-plus points a game to go along with more than 10 rebounds.

Young said her recruiting process didn’t go as smoothly as she might have liked. However, instead of getting discouraged, she waited for the right time, and within two weeks of getting an offer from Hampton, she committed.

“I just had one of those gut feelings,” she said. “I felt good about my decision choosing to go play there.”

Young took home back-to-back Southeastern District Player of the Year awards, winning it her junior and senior seasons. In that same span, Young was also was chosen the Suffolk News-Herald Winter Female Player of the Year. This season, she recorded a school-high 52 points in a win over Great Bridge High School. During her junior and senior campaigns, she was also a first team All-State selection.

The Suffolk Christian Academy Knights have faced some tough competition in a tournament in Norfolk, but they hope the competition... read more