A partnership made in 3D 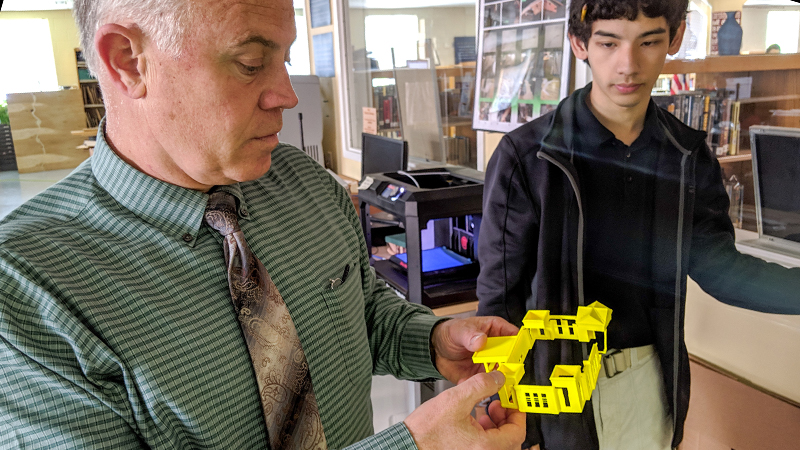 Michael Chen, right, a senior at Nansemond-Suffolk Academy, as well as former students Mitchell Hynes and Riley Jonak, collaborated with HBA Architecture and Interior Design and TowneBank to make a 3D rendering of a new bank that is slated to be built in Chesterfield County. Dave Gillis, NSA’s Director of IT and STEM Innovation Lab, worked with HBA and TowneBank to facilitate the project.

Students at Nansemond-Suffolk Academy got hands-on, real-world experience over the last year in collaborating with a pair of businesses on creating three-dimensional models of a bank that will soon go up in the Richmond suburbs.

The students worked with Portsmouth-based TowneBank and HBA Architecture and Interior Design of Virginia Beach to create 3D models of a bank that will be built over the next 18 months in the suburban Richmond area.

Michael Winner, principal of HBA Architecture and Interior Design, said the students “were no shrinking violets” in the collaboration and stepped up to the challenge.

“They’re very strong, they communicated well and they integrated well with someone from the business environment,” Winner said. “It was a real pleasure to work with them.”

Mitchell Hynes and Riley Jonak, 2018 NSA graduates, participated in internships at the school during their senior years and helped kickstart the project, along with the school’s Director of IT and STEM Innovation Lab Dave Gillis.

The first 3D model was an attempt at a rendering of the full site, Gillis said, doing it in pieces because of space considerations, and then learning the rendering needed to be rescaled HBA.

In a subsequent conversation, they also learned that the data from the architectural drawings needed to change. Winner, who wasn’t as well-versed in 3D printing, had one of his interns, Ashley Burgos, work closely with Hynes and Jonak — “and that’s when the real work began,” Gillis said.

“She interfaced very well with the students, and she was able to bring in the latest 3D modeling information in terms of programs and platforms needed to print it,” Winner said.

Burgos reworked HBA’s data, but before they could get further along, Hynes and Jonak left for college, and NSA senior Michael Chen took on the project in the fall as a technology intern.

The project lost a bit of its momentum after Hynes and Jonak graduated, but according to Keith Horton, a senior executive vice president at TowneBank and a member of NSA’s Board of Trustees, it picked up again with Chen’s involvement, as well as improved data from HBA that helped improve the 3D renderings.

“What looked good architecturally wasn’t creatable on a 3D printer,” Gillis said. “It looked like it had surface, but it had no depth. So, on the blueprint, it looked good, but it didn’t produce enough structure for the model to be created in the 3D printer.”

Said Chen: “It wasn’t really until seven versions until we got, really, a result that not only printed well but held together well.”

And by the end of February with that seventh rendering, Chen had something of use for both HBA and for TowneBank.

Horton said he looked at the project with two different things in mind — wanting to see how to do it and how much time it takes. He likes to have actual models to look at and make sure that everything corresponds accurately to other components in the piece.

The renderings gave Horton a sense of size, as well as the mass of the structure on a scale component. He was pleased with both the renderings and the graphics on them.

“I wanted to see how it would render out into a 3D rendering, and it turned out really nice,” Horton said. “I was really happy. The kids learned a lot, and the architect probably learned a lot too as far as interfacing with a third party.”

Gillis said Burgos, who along with Winner came to tour the school’s lab before the project started, “was fiercely patient” in working with the students.

That patience paid dividends, though.

“When Ashley came to pick it up, she was pretty excited,” Gillis said. “Our customer was visibly pleased.”

Gillis said that, as an educator, it was enlightening for him to see the students educating the professionals.

“To me, when you know your capability, you can go upstream from your capability and guide the design process,” Gillis said, “so that was what was exciting for me.”

Chen said the collaboration was unique and rewarding, and he learned a lot — not just in working with the 3D renderings themselves, but also in how to relate with professionals who would be using his output on a tangible project.

“He would probably tell you it’s a frustration,” Gillis said, chuckling.

Horton hopes the NSA students will be able to work on other projects, whether on or off campus.

“The architect pulled the models out, and needless to say, I was very proud of both my partners — both the school and HBA working together,” Horton said. “I just forgot about it. I was surprised and happy for the product to be delivered like that.”

Gillis said everyone now has a better understanding of what happens on each end of such a project.

“Now we know what is required in the handshake between the architectural data and the 3D printing data,” Gillis said. “Now that we know that, when they want to, they can use the service.”

Traditionally, architects would use white Styrofoam boards to make models, Gillis said, and it could take hundreds of hours. Winner said he could recall when model building was an integral part of architecture school. Now, the models are produced on a computer and then printed on a 3D printer, something that takes roughly 30 hours, by comparison, and something HBA typically outsources.

But with the successful collaboration with NSA’s students, Winner sees possibilities in collaborating with them on other projects in the future.

“Hopefully, we’ll get to do another project with them and utilize some of the stuff we learned, and the students as well,” Winner said. “It was a positive process.”