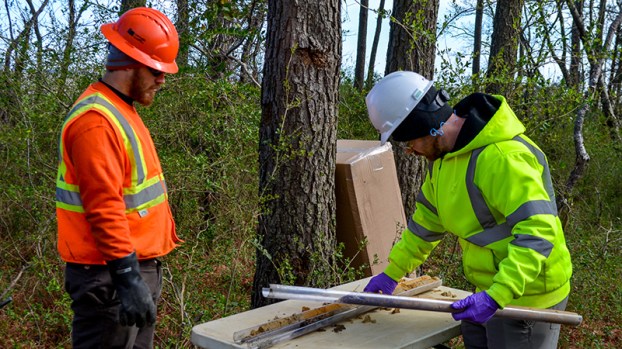 The ongoing cleanup of an old North Suffolk ordnance depot is moving closer to completion, paving the way for exciting new developments on the scenic, waterfront property.

The former Nansemond Ordnance Depot is 975 acres of waterfront property at the end of College Drive. The military stored ammunition on the land during World Wars I and II, and it was used as a disposal area for bulk explosives, small arms ammunition and scrap metal.

Since 1988, removal activities have been conducted at the site. The Restoration Advisory Board met for its quarterly meeting on March 7 to discuss the as-then latest cleanup progress. This board consists of U.S. Army Corps of Engineers personnel, property owners, local residents and local, state and federal regulators.

Part of project 19 is Area of Concern 23, which spans more than four acres of shoreline on the property. Leidos contractors collected soil samples there on March 26 as part of the remedial investigation that’s required under the Comprehensive Environmental Response, Compensation and Liability Act, or CERCLA.

Samples collected by the geoprobe were studied by a geologist for moisture, texture, materials and various factors that indicate the presence of hazardous waste and its full extent in the ground, if there is any.

“When you take all of these different soil borings along the site and put them all together, you can then start doing modeling,” Zaman said.

The overall cleanup of this site may go on to 2024, depending on the contamination that needs to be addressed, Zaman said, but it could be done as early as 2022 if there no contamination is found at this stage. The last cleanup project is expected to be completed in 2025.

Zaman described this cleanup as a team effort between the Army Corps, the Environmental Protection Agency, the Department of Environmental Quality and the Tidewater Community College Real Estate Foundation, one of the site’s major landowners.

According to realestate.tcc.edu, the foundation plans to offer 245 buildable acres for research and development activity, entertainment, dining, residential options and offices for corporate or medical needs.

Matt Baumgarten, executive director of the TCC Real Estate Foundation, wrote in an email that TCC is closely following the city of Suffolk’s Comprehensive 2035 Plan as the college works on its own development plans.

“The area that the TCCREF property is located is designated as a ‘Mixed Use Core District,’” Baumgarten wrote. “This will include a strong mix of multi-family residential, hotel, office, and commercial space as well as plenty of open space for residents and citizens to gather and recreate.

“Our partnership with Suffolk is strong and we work very closely with the city manager’s team to continually cultivate and grow the many possibilities of what this site can and should develop into.”

One of the proposed projects for this site focuses on 1.3 miles of the available shoreline, the work for which has just commenced earlier this April, Baumgarten wrote.

“The city’s goal for the project is to create an opportunity for the public to interact with the site and the waterfront,” he wrote, “as well as serve as a major asset for the redevelopment of the site.”

Suffolk Police are investigating an armed robbery that took place Friday morning at the 7-Eleven in the 6000 block of... read more