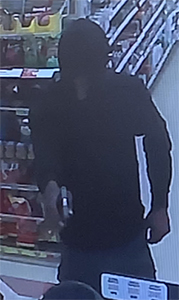 The suspect in a Friday morning robbery at the Chuckatuck 7-Eleven. (Submitted Image)

Suffolk Police are investigating an armed robbery that took place Friday morning at the 7-Eleven in the 6000 block of Godwin Boulevard, according to a news release.

The incident took place at about 5:30 a.m., the release stated, with a preliminary investigation indicating that a tall, thin black male entered the store, displayed a handgun and demanded money.

The man fled on foot with an undetermined amount of cash, the release states, and was further described as wearing jeans and a black hoodie on over his head with the drawstring pulled tight to cover his face, according to the release.

A Suffolk man has been indicted on charges of voluntary manslaughter and distributing/selling for profit Schedule I or II drugs... read more