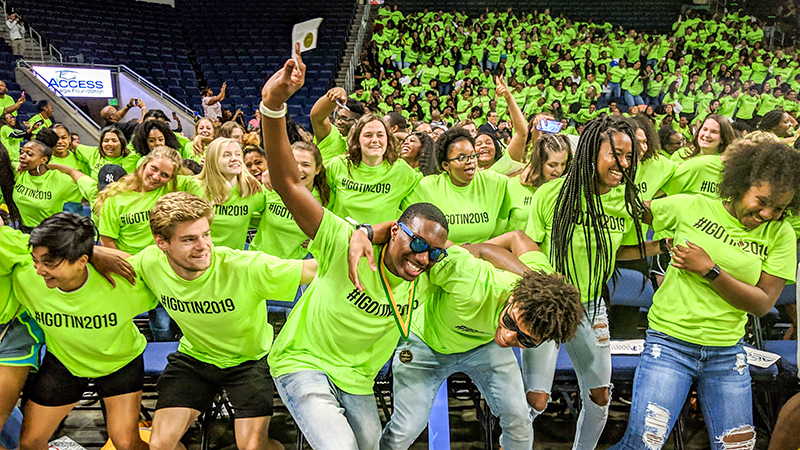 No one could beat Kori Riddick in a festive game of musical squares, and because of that, the Nansemond River High School senior earned a $1,000 college scholarship.

He was hardly the only one coming away from the ACCESS College Foundation’s College Commitment Day with money, though.

Some of the more than 2,000 high school seniors from South Hampton Roads and the Eastern Shore received $25,000 in scholarships, while all were able to boast of their college choices during a boisterous ceremony Tuesday at Old Dominion University’s Ted Constant Convocation Center in Norfolk.

Riddick, who plans to attend Norfolk State University and study computer science and software development, was as hyped as any of the seniors in attendance at the fourth annual event.

“It’s crazy in here,” a hoarse Riddick said over the cheering of the crowd. “I lost my voice I’ve been having so much fun. I love it. I love it.”
He said it was a unique way to earn a scholarship, but he enjoyed the moment.

“It’s unreal to see my hard work finally coming to being fulfilled, so I just want to keep on going,” Riddick said.

They hardly needed prompting, but Shaggy of Z104’s Morning Zoo program nonetheless hyped the seniors — including seven bus loads from Suffolk — in the arena.

ACCESS adviser Adrienne Miller said the event is special to her heart.

“I really think it’s exciting that people are getting acknowledged for going to college,” Miller said. “It’s exciting, as you can see. It takes a lot of preparation … but the end result is, they’re happy, they’re pumped.”

Jaren Reid, a Lakeland High School senior, received a scholarship to Chowan University in Murfreesboro, N.C., where he plans to study mathematics and is thinking about adding another major in accounting. He said it’s a blessing for him to not have to pay the full cost of tuition.

“Being able to receive an award like this, it’s a good thing,” Reid said.

Akira Goden, a King’s Fork High School senior, was surprised to have her name drawn for a $2,500 scholarship. She plans to attend Virginia Commonwealth University in Richmond and study health sciences on a pre-med track.

“It means a lot, especially coming from Suffolk, to be able to get money like that,” Goden said. “It just shows that God is with me on this journey.”

Goden was among the many who enjoyed the event.

“It’s amazing that they’re giving children opportunities to go to college and get money for college as well,” Goden said.

Said Riddick: “It’s good to see academics being rewarded, and the hard work for academics paying off. I hope they keep this going for years to come.”