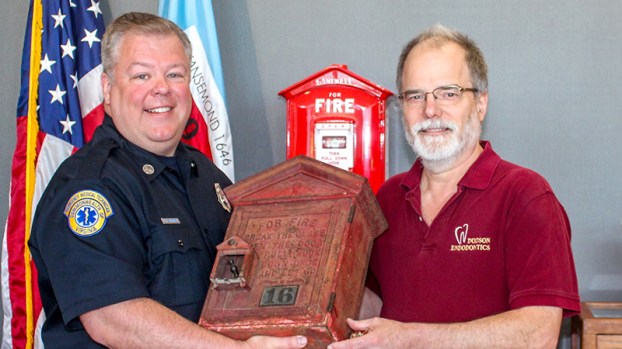 Master Firefighter and Suffolk Fire and Rescue Museum curator Michael Brinkley, left, accepts a donation from Suffolk dentist Dr. William S. Dodson Jr. of a Gamewell Fire Alarm box that used to be located on the corner of Highland Avenue and Katherine Street from the early 1900s until the 1960s. (submitted photo)

The Suffolk Fire & Rescue Museum added a new piece of historic memorabilia in the lobby of Station 6 on Saturday, when a local dentist donated a Gamewell Fire Alarm box that dates back to the early 1900s and was in use until the 1960s.

Dr. William S. Dodson Jr. a Suffolk dentist who lives in Gloucester, used to operate Main Street Antiques and would go to auctions to find items for the store, he said, buying items he thought would be a good fit.

At one such auction about 15 years ago, he bid on a fire alarm box, but at the time, he didn’t know whether the item was significant to Suffolk.

“When it came up for auction at the last minute, it said Suffolk on it,” Dodson said. “I didn’t know whether it was Suffolk, Virginia or Suffolk, New York.”

It turned out the fire alarm box was indeed from the local Suffolk and was fire alarm box number 16, which used to be on the corner of Highland Avenue and Katherine Street until it was replaced by a more modern box.

Dodson said that now was the time to give it to the museum, especially with an impending move and wanting to make sure it didn’t get lost.

“It was really neat,” said Master Firefighter and museum curator Michael Brinkley. “He called us and wanted to give it to us.”

Brinkley said Station 6 has another fire alarm box, Box 26, which was on the corner of Washington and Tynes streets.

Prior to the modern 911 system, there were 37 fire alarm boxes, Brinkley said. When someone pulled the button down on one of the boxes, it would send an electrical signal to one of the fire stations, which would then respond to the call, he said.

With this year marking the 135th anniversary of Suffolk Fire & Rescue as an organized fire service, Brinkley and Dodson said they hope people will come across more items that can go to the museum. In the meantime, Brinkley hopes he can restore the museum’s latest donation soon.

“We enjoyed showing it off to a lot of people,” Dodson said. “It was quite a conversational piece. I had no intention of keeping it or selling it.”

The Suffolk Ruritan Club and Suffolk Fraternal Order of Police will thank local first responders and veterans this Saturday with... read more