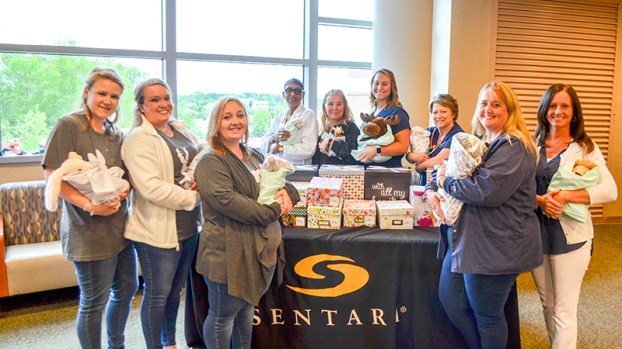 Helping parents hold on after loss

Founders and board members of Weighted Angels visited Sentara Obici Hospital on Monday morning to help make sure that no family that has suffered a pregnancy or infant loss leaves the Women’s Center with empty arms.

Weighted Angels is a nonprofit organization that operates in Hampton Roads and Richmond. Its founders and board members are Lauren Fuller, Kasie Ballard, Kate Crump, Taylor Louis, Sarah Berry, Erin Miller and Heidi Anderson. Each of these women experienced a stillbirth.

They had dreams of one day leaving the hospital with their newborn children in their arms. Instead, they left with blankets, locks of hair and other small tokens of remembrance. But their hands still felt empty.

“We’ve all experienced a loss, and we all left the hospital with nothing,” said Ballard, president of Weighted Angels. “We wanted to fix that.”

The Women’s Center at Sentara Obici received 18 of the organization’s “Angels,” which are finely crafted stuffed animals that are made with materials that give them weight.

They’re each soft to the touch with a solid, well-balanced distribution of weight and the faces of friendly giraffes, deer, rabbits and other animals. Every animal represents a child that belonged to one of the board members and also a different weight class, ranging from less than a pound to nine pounds.

The goal is to allow parents who have experienced pregnancy and infant loss to have an “Angel” that has a similar weight to the child they lost.

“We try to get it as close to the actual weight — by the pound,” said Co-Vice President Crump, wearing a gray-and-white shirt with the name “Ellett” written on a beautiful silhouette of a deer. Ellett was Crump’s son that was stillborn in June.

“I think it’s a wonderful support for the parents in the center,” said Beth Johnson, clinical nurse manager for the Women’s Center and Nursery. “We’re just honored that they chose our facilities to donate to.”

Bereavement Coordinator Dawn Eure said the “Angels” are a wonderful asset for parents coping with such a tremendous loss.

Weighted Angels operates in Hampton Roads and Richmond but also fills out individual orders elsewhere in Virginia. Ballard said some of them have contacts that work in the birth community that let the women know that a family is in need.

Each board member wore a gray shirt with a different animal’s design on it, along with the name of the child that woman lost in bold white font.

Berry, the nonprofit’s communications and marketing director, said that Monday would have been the birthday of her daughter, Finley. She was delivered stillborn in April 2017. Berry’s shirt was emblazoned with a bunny’s outline and Finley’s name.

She said that being able to hold something that weighs like the child you lost as you’re leaving the hospital can help ease that burden, especially after you hold your stillborn child for a moment — and then never again.

“It’s something to hold on to and help you through the grieving process — to have and to hold in your arms, and to remember what it was like to hold her. Because I’ll never hold her again,” Berry said.

The long-term goal of “Weighted Angels” is to raise enough money to provide every Virginia hospital with a complete set of their stuffed animals. Visit facebook.com/weightedangels for more information and to make a donation.

Families and friends will join together in a solemn vigil on the evening of May 18 during the lighting of... read more