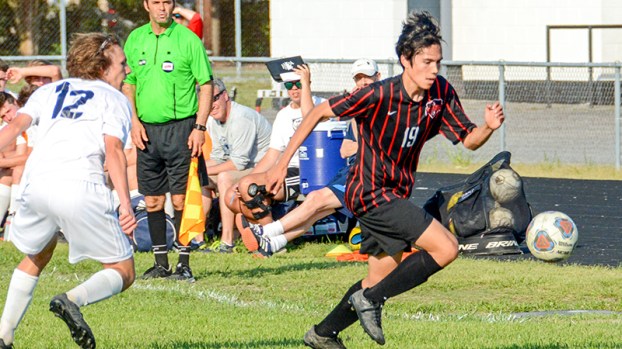 Douglas Hill was voted Suffolk News-Herald Player of the Week after a strong week that included a tying goal and a go-ahead goal for the Warriors. (Melissa Glover Photo)

Junior Douglas Hill was voted Suffolk News-Herald Player of the Week after a strong week that included a tying goal and a go-ahead goal for the Warriors.

The Nansemond River High School boys’ soccer team has gotten off to a strong start. With so many players graduating from the past two seasons, many weren’t sure what to expect for the team, but several players have been able to step in and step up.

Hill, who was solid in his contributions last season, found a way to take his game to a new level this season.

Last week, he had a strong week for the Warriors, helping them tie with Grassfield High School and then following that with a go-ahead goal against Western Branch High School for the win.

“I felt great coming out of the week,” Hill said. “I had strong finishes during those games after spring break. I really wanted to set the pace for the rest of the year.”

Hill has been playing well throughout the year and has been surprised at how strongly his play has come along. As the Warriors move through the latter part of their season, he hopes he can continue playing at a high level so he can carry it over into his senior season.

Because of the success the Warriors have been able to find this season, Hill believes there is potential for success at the end.

“The group of guys we have on the team this season has shown grit and character,” Hill said. “We all continue to get better. We have been able to hang with some of the top teams in the 757 after what had happened with us last season.”

Preparing for his junior season, Hill wanted to come in and be the best teammate he could be. He wants to become a part of a Nansemond River group that will leave a lasting effect on the program. What motivates him on the field is the chance he gets to play soccer with his teammates, whom he calls his best friends.

“Our chemistry is big, and it’s what makes our team different from others,” he said. “Not only on the field but off the field, we are a tight group. Not everyone gets a chance to play a game they love with their best friends, and that motivates me when I get on the field.”

Nansemond River is coming off of two straight losses, something that hasn’t happened to the team yet this season. Hill excited to step back on the field this coming week with his teammates.