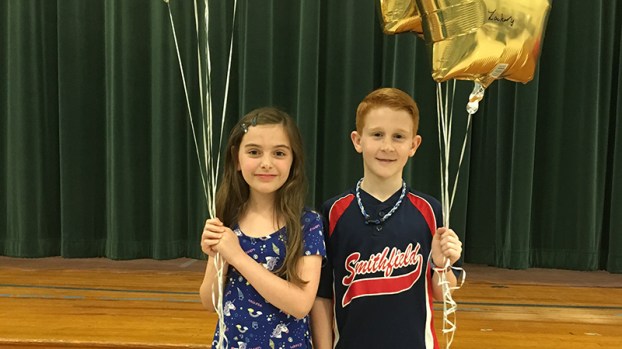 Two students at Carrollton Elementary School recently were honored for their dedication to the school’s AAA Safety Patrol.

The students learned of their awards during school on Thursday, when they were surprised by their fellow Safety Patrol students.

“I was really happy but also shocked,” Lizzie said. She said she enjoys being on the Safety Patrol because she gets to help people.

“I can help everybody, and I can help people be safe,” she said. “I’m helping everybody in the school. Also, I get to meet new people, and I always go for the opportunity.”

Walker said he also enjoys being on Safety Patrol.

“I like being on the Safety Patrol because I get to set a good example for other people, and I get to help other kids in the school,” he said. He was also surprised by the announcement last week.

“I was really happy, and I did not know the rest of the Safety Patrol was doing it,” he said.

Every year, the AAA Safety Patrol program recognizes 10 students in the area for the hall of fame, said Marie Berkeley, the school counselor at Carrollton Elementary School who’s in charge of the Safety Patrol. Students are nominated and then have an interview and are observed on duty.

Berkeley said being on Safety Patrol is an honor at Carrollton Elementary. A new set of students is able to participate every nine weeks, and the students who stay longer are promoted.

“I choose three out of every group each nine weeks to continue as captain,” Berkeley said. “It’s awesome to see their leadership skills developing.”

Students have to fill out an application for Safety Patrol. While they’re on duty, they stand at their duty station in the hallway and make sure other students are not running or doing other dangerous things. They also help at the breakfast cart in the mornings.

“They’re also giving encouragement,” Berkeley said. “A lot of them will give high-fives to the younger kids as they’re going off to the bus.”

Berkeley said everyone is proud of Lizzie and Walker.

“We’re super proud of them over here, because it’s a big deal,” she said.

The students will also receive an award at the May 9 School Board meeting, and Lizzie will be honored at an awards banquet in June.

An excited crowd of second-grade students gathered in the atrium at Carrollton Elementary School on Friday to cut the ribbon... read more