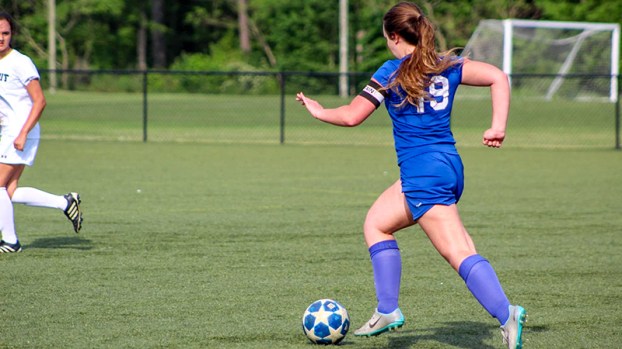 Kaitlyn Brittingham makes a run for the goal during one of Suffolk Christian Academy girls’ soccer matches. The Lady Knights finished this season with a 7-4 record.(submitted photo)

With their season coming to an end, the Lady Knights feel good about the growth they showed. They finished with a 7-4 record after losing at least eight players from last year’s team. In every game, the Lady Knights performed well, and coach Marquis Lassiter believes they accomplished their goals.

“One of the biggest things we wanted to do was play hard every game and let the results follow that,” Lassiter said. “I felt like they did that. We wanted to be better on and off the field, and I felt like we were able to accomplish that as well.”

Last week, SCA competed in a tournament in which it won its first two games, giving the team the opportunity to play for a championship. However, the Lady Knights lost in a shutout. The team they played was much older and experienced, and Lassiter feels that as the Lady Knights continue to get more experience playing hard together, they can be a similar position in the coming years.

“With the girls playing the way they played throughout the whole year, it showed a sign of maturity,” Lassiter said. “Especially after what we lost last season. We were able to earn a few shutouts this season because of how hard the girls worked. The chemistry was there. That’s what you want to see as a coach.”

Even though SCA will be losing a talented senior in Kaitlyn Brittingham, the Lady Knights feel good about what they will be returning next season. Lassiter believes another year of chemistry and time competing together could put them at another level.