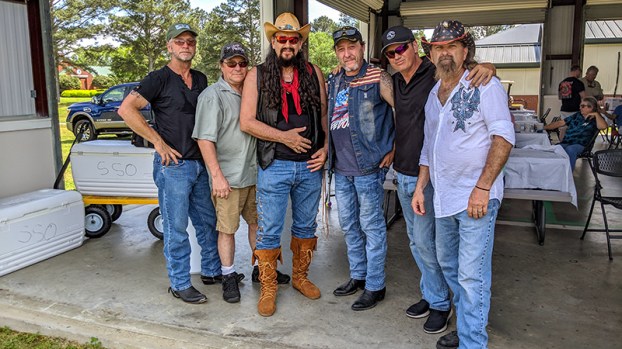 Thank you for your service.

That’s the message the Suffolk Ruritan Club and Suffolk Fraternal Order of Police wanted to give to area veterans and first responders at the Appreciation BBQ on Saturday at the YMCA Camp Arrowhead.

Members of the southern rock band Gator Head, having played the Thunder in the Smokies Rally in Maggie Valley, N.C. the night before, said they wouldn’t have missed the opportunity to play for those who serve.

Band member Brian Hunt joked that they were a bit frazzled after making the more than six-hour drive back to the area the previous night, but they still made it in time to perform a set that had the adults singing along and the young children dancing.

“I’m a veteran, one of the other guitar players is a veteran, a lot of family members are veterans, so we believe firmly in this,” Hunt said.

Mark Deaver, who came to the event with his wife Katrina and children Ryleigh, 5 and Addison, 3, just started working for the Suffolk Sheriff’s Department less than two weeks ago after retiring from serving in law enforcement in Portsmouth. His two daughters were up dancing to the music, and he and his wife enjoyed being in their new hometown.

“It’s a nice event to get everybody out,” Deaver said. “I’m very appreciative of the people that support our country and (are) on the front line that give us our freedom in nice communities like this – the police officers, the firefighters, the medics, the sheriff’s department, everybody that makes our hometown … safe.”

Paul Long, Assistant Scoutmaster for Boy Scout Troop 16 and a Ruritan member, was out at Camp Arrowhead at 6 a.m. setting up for the event, and he and about 20 members of the troop volunteered their services throughout the day.

Jimmy Franks, a co-chairman of the event, said the Ruritan Club is all about giving back to the community. Various items were raffled off as part of Saturday’s event, including a TV and stereo.

“Our whole theory is helping others,” Franks said, “and helping the veterans, it does give us a good feeling. A lot of the police and firemen and first responders are veterans, and a lot of our members are veterans.”

The veterans and first responders who came out expressed their own appreciation to the Suffolk Ruritan Club and Suffolk Fraternal Order of Police for hosting the event.

“You can’t spend any better Saturday than with a bunch of good people, especially first responders,” Deaver said.

Hundreds of people listened to Meagan Jenkins share her story of giving birth to her daughter at 26 weeks as... read more