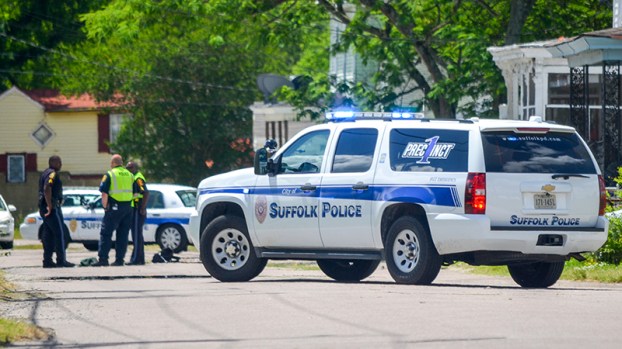 Suffolk Police investigate the scene of the Thursday morning accident involving a Honda Accord and a dirt bike.

Suffolk Police and Suffolk Fire and Rescue responded Thursday morning to an accident involving a passenger vehicle and a 19-year-old man on a dirt bike.

Emergency Communications was contacted at 11:04 a.m. about the accident, which occurred at the intersection of Van Buren Avenue and Culloden Street in downtown Suffolk, according to a city press release.

A preliminary investigation determined that the man was on a small dirt bike traveling north on Van Buren Avenue when the accident occurred, involving a Honda Accord at the intersection of Culloden Street.

The driver of the car remained on scene. The man on the dirt bike was treated by Suffolk Fire and Rescue personnel and airlifted by Nightingale to a local hospital for further treatment of serious injuries.

Deb Munroe has taken a long-neglected downtown space and turned it into a site for quirky and unconventional art. Her... read more