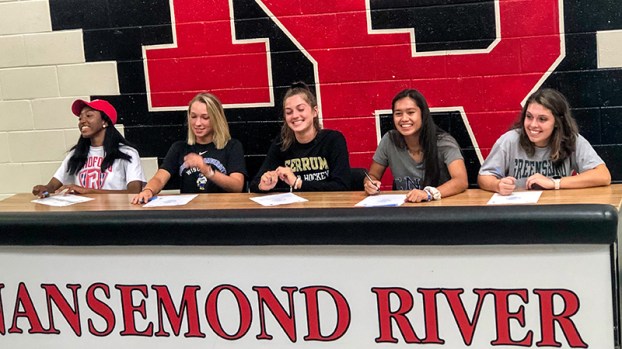 Five Lady Warriors headed to the next level

Five Lady Warriors have put ink to paper to play at their respective schools in college.

In a signing ceremony Thursday, Faith Bibbo, Saleena Lynch, Sarah Rhiel, Haley Russell and Emily Binley will all be taking their talents from Nansemond River to the college level. Russell, Lynch and Rhiel will play soccer, while Binley and Bibbo will be playing field hockey.

Lynch will be playing at the Division I level, as she signed her letter of intent to play for Radford. Once she took her visit to the school, she knew that it wasn’t going to be tough for her to turn down the opportunity. Playing Division I soccer has always been a goal of hers since she was young.

“I immediately knew their program was best suited for me when I visited,” Lynch said. “I connected with the team well and felt like Radford could offer me the best opportunity athletically and academically.”

Rhiel will be heading to Christopher Newport to play soccer. It was a tough decision for Rhiel deciding on her future because she is a field hockey standout as well. Deciding between soccer and field hockey, she said, was one of the hardest decisions she has had to make in her life. Playing travel soccer helped her get in contact with CNU. She went to a handful of camps and felt good about wanting to commit there.

“CNU had all the qualities I was looking for,” Rhiel said. “I felt comfortable with the coaches, and everything the school embodies is fantastic.”

Russell will head to North Carolina, as she has signed to play for Greensboro College.  Russell did her research of Greensboro, and after competing in a camp, she felt it was a possibility she’d attend. A year later she decided to commit.

“After my camp, I decided that I loved the environment,” Russell said. “I love the coaching style the team and the campus it felt like a family, and I knew it was my future home.”

Binley and Bibbo will both be going to school for field hockey. Binley committed to Concordia University in Wisconsin back in the fall, finally making the signing official this week. She lived in Wisconsin up until the fourth grade and after visiting there, she was willing to commit immediately. Bibbo will head to Ferrum College, in which she said felt like home after visiting multiple schools.

“The program is fairly new,” Bibbo said, “and the coaches talked with my family about bringing players in that can change the program, and they thought I’d be a nice addition. It’s the best fit for me athletically and academically.”

Presson comes up big for Lakeland

Hayleigh Presson was voted Suffolk News-Herald Player of the week after her pitching helped Lakeland’s softball team to a 2-1... read more