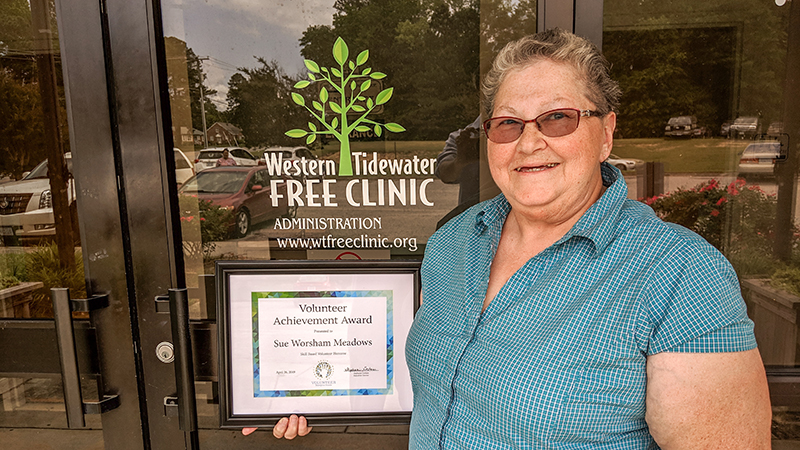 With humility and humor, Sue Meadows has taken a shine to her work as a volunteer with the Western Tidewater Free Clinic. Her expertise was quickly noticed by the clinic’s staff, and now it has been noticed across Hampton Roads.

Meadows was recently honored with a regional Volunteer Hampton Roads Achievement Award for Skills Based Volunteerism. She was not aware of the award until she had won it, and she said that she’s only representative of the more than 150 people who volunteer at the Free Clinic.

According to Director of Development Ashley Greene, Meadows, who worked in social services in Isle of Wight County for 27 years until she retired about two years ago, brought her skill set to WTFC. Meadows streamlined documents and the clinic’s paperwork process, which saved time for both the clinic and its patients.

“She has brought her lifelong skills and compassion to her volunteer work at WTFC, good-naturedly guiding patients through the eligibility process,” her nomination packet noted about her achievement. “Her ability to motivate, calm and empathize with our patients continues to have a lasting effect on the community by providing our patients with a renewed belief in the good and kindness of humanity.”

Free Clinic Volunteer Coordinator April Adkison called Meadows “a true hero in our patients’ eyes,” and said that she has had an immeasurable and positive impact on its operations.

“Her life’s work at Isle of Wight Social Services has greatly benefited our clinic patients who rely so heavily on her help during the eligibility process,” Adkison said. “Sue is always quick to share any and all resource information she has with our patients.”

“When I retired, I knew I was not going to have five pajama days a week,” Meadows said. “Coming here makes me get up and get dressed. But I enjoy working with the people.”

She volunteers at the clinic two days per week for at least half a day or longer, and will often come in when she is not scheduled.

“She’s made a critical impact,” Greene said. “She’s humble. The impact she’s made, we feel every single day.”

According to Adkison, “Eligibility is the starting point, if we’re doing our job right, changing people’s lives. But it starts in the area that Sue works, because that opens the door to access.”

Meadows, who has worked more than 900 volunteer hours over the past 20 months, assisted with the eligibility screening of 498 new Free Clinic patients and another 182 VCU Medical Center registration appointments, according to her nominating packet.

But she’s still humbled by the award and said that she’s “just one small cog in the wheel.”

Adkison and Greene still say Meadows deserves her share of credit. They love her for her work ethic, and because she keeps everyone laughing.

Meadows said she will continue volunteering at the clinic for as long as she is able, simply wanting to help people who may have fallen through the cracks before they get to the free Clinic.