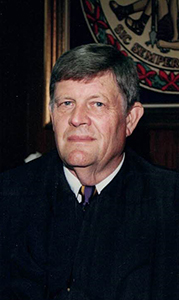 The Hon. Edward Everett Bagnell, age 81, of Suffolk, died May 14, 2019, at home after several years of declining health. He grew up in the small community of Crittenden in Nansemond County and was the son of the late Carl Edward Bagnell and Anne Everett Bagnell Jones.

Judge Bagnell graduated from Chuckatuck High School and Randolph-Macon College and received his Juris Doctorate from T.C. Williams Law School at the University of Richmond. During his two-year service in the U.S. Army, he received the Army Commendation Medal for Distinguished Service.

He began his legal career in Suffolk in private practice with the late Sen. J. Lewis Rawls. He was appointed a substitute Juvenile and Domestic Relations Court judge in Nansemond County in 1967, appointed a General District Court judge in 1976 and elected to Circuit Court judge the following year. He served 32 years on the bench and always considered it a high honor to serve the Commonwealth of Virginia. He was proud to be appointed to serve on the Model Jury Instruction Committee for many years.

He remained active in the legal community in retirement and had many rewarding years as a mediator and arbitrator. He was a member of the Virginia State Bar for 50 years.

Judge Bagnell was a member of the Suffolk Christian Church, where he had served on the Board of Deacons. He was a past president of the Lions Club, Crittenden Ruritan Club and Jolly Boys. He was a board member of the Seaboard Bank and Hampton Roads Savings and Loan.

Judge Bagnell will be remembered for his love of family and friends, strong work ethic and strength of character, as well as his love of tennis, golf and fishing at Cape Hatteras.

In lieu of flowers, donations may be made to Children’s Hospital of the King’s Daughters, PO Box 2156, Norfolk, VA 23501 or the Bagnell Scholarship Fund at Nansemond-Suffolk Academy, 3373 Pruden Blvd., Suffolk, VA 23434.

The family would like to thank his special caregivers, Sylvia Anderson and Lisa White, for their loving care and kindness. Condolences may be registered at RWBakerFH.com.

On May 11, 2019, the angel of the Lord carried home our beloved daughter, mother, grandmother, niece, aunt, cousin and... read more