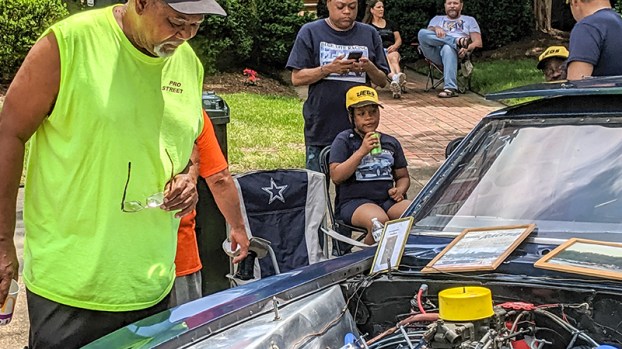 Al Britt of Portsmouth looks at one of the classic cars on Main Street during Saturday’s Shake, Rattle and Roll car show.

Rolling for the last time

Saturday was a bittersweet day for Sonia Thacker.

As the volunteer coordinator for the Shake, Rattle and Roll car show in downtown Suffolk since its inception 11 years ago, Thacker’s established relationships with many of the car owners who took part in the show was evident in the number of hugs given and kind words spoken.

But the embraces were a little tighter, and the kind words spoken with a tear or two, as this will be the final time for Shake, Rattle and Roll — though there will be other car shows.

“It’s a sad day,” Thacker said, after the event had wrapped up early in anticipation of inclement weather later in the afternoon. “It’s pretty sad. I’ve met people from all over. Besides from here, people come here from Richmond, from Maryland, from Carolina. I’ve met a lot of people over the past 11 years.”

Thacker said she is unable to keep being the volunteer coordinator due to family obligations.

Thacker, who grew up in Newport News and at one time lived in Whaleyville, got interested in classic cars through her father, who she helped underneath the hood of his cars when she was a kid.

As an adult, she worked in the auto parts industry, and helped to start two stores — an Advance Auto Parts and an O’Reilly’s Auto Parts — in Suffolk.

“Suffolk will always be a part of me,” Thacker said.

As for the show itself, it featured 120 classic pre-1979 cars that lined Suffolk’s historic Main Street.

Al Britt, 69, of Portsmouth, said he likes to check out the cars and get ideas to restore them. He recalled racing a 1967 Chevy Chevelle in high school in the late 1960s in Suffolk. A favorite car of his is his 1968 Chevrolet Nova.

“One thing I like about people that like cars, they don’t look at color, they look at automobiles,” Britt said. “Some of my best friends when I was in high school helped me get my racecar together.”

“This is a lovely event,” Britt said. “They have some nice cars here.”

Bobby Cullipher, 73, of Chesapeake, used to work on Britt’s cars.

“That was a long time ago. You used to be a punk,” Cullipher said as the two of them laughed.

Cullipher said he has been coming to the show for years and recalled the show originally starting up for ex-drag racers at Suffolk Raceway “back in the day.”

McCarty, and his wife Betty, first owned the car 55 years ago and used to drag race it before he went into the Army and sold the car. He later found his car at a garage sale two blocks from their home. It had the same upholstery in it, though the car had been painted silver. Its owner did not want to sell it, but after he died in 2016, that person’s son was willing to sell it, and 55 years later, that’s how they got it back.

He had hoped to bring the car to the show last year, but was not able to finish restoring it until a week later.
“We brought it here this time, and he’s redone everything,” said McCarty’s wife, Betty McCarty, 75. “We’re really excited with it.”

It’s that excitement that has kept Thacker involved with the show, and Betty and Junior McCarty were just two of the people who offered Thacker hugs and kind words.

Tourism Development Manager Theresa Earles said Thacker’s enthusiasm and involvement for the event was evident, and called her “a godsend to the whole process.” She said it has been, essentially, her show from the beginning. While Earles’ department has handled the logistics and the marketing of the show, it was Thacker who talked to all the car owners and encouraged them to come. She also sold sponsorships in the event program.

“She knows the history of the racetrack, she was out there when the racetrack was still in place,” Earles said. “She knows almost every person in this show, and so she has really spent years connecting our show with other car show participants and other car owners, and really getting us out there and knowing who we are.”

And even though this show will not continue, there will be other car shows and other events to draw people downtown. She was pleased with the turnout, even if the last version of this event had to end early.

“I’m glad that if it had to end, that it ended on a positive note,” Earles said. “We have other events planned for the future that aren’t car-show related that will still be downtown. So there will still be reasons for people to be downtown — not that there aren’t plenty of reasons now.”

Thacker said it would have been too difficult for her to tell anybody beforehand that the show would not continue. After it was over, though, she was able to reflect on what the show has meant to her. Many of the drivers, meanwhile, mirrored what she has meant to them.

“The whole purpose of the show is, it was a tribute to the people who raced out of Suffolk,” Thacker said. “And my dad was a big part of that, and all the people, some of them watched me grow up and (see) what I’ve become. Just the stories behind it, the things that transformed through the years, the things that were done. I love listening to the stories.”

And the cars, as one roared beside her, with a smile coming across her face.

Residents thankful to be alive after tornado