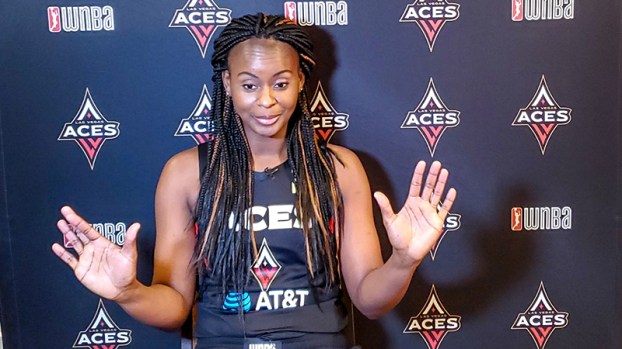 Sugar ready to win with Aces

When the WNBA’s Las Vegas Aces play host to the New York Liberty on June 14, it wouldn’t come as any surprise to see Suffolk native Sugar Rodgers take over the game.

As the former King’s Fork High School standout prepares for her seventh season in the WNBA — after beginning her career in Minnesota and spending the past five seasons in New York — she’s also preparing for her first season with the upstart Aces, who figure to be a Western Conference contender this season.

It’s pure coincidence the Aces and Liberty collide on the 14th, but for Rodgers, it’s the most special number in her life.

“My mom was a strong woman; she always prepared me,” Rodgers said Monday, at the Aces’ media day. “She always told me that I was different, that I could do anything that I set my mind to. Through all the hard times, I’ve done that, and I give her the credit.”

Rodgers, a 2017 All-Star, rejoins coach Bill Laimbeer, who coached the former Georgetown star when he was with the Liberty. In acquiring Rodgers, the Aces improve their depth by adding a long-range shooter who is a career 34.8 percent shooter from 3-point range, including 36.6 percent over the last three seasons.

“When I got the call, it was kind of bittersweet. All the things we did in New York, all the success we had,” said Rodgers, who enjoyed her best season in 2016 when she averaged 14.5 points, 3.7 rebounds and 2.4 assists, while connecting on 41.3 percent of her shots from beyond the arc. “And now I’m linked back up with Bill and I’m excited, because I have some of the best memories and some of the best seasons playing with Bill, so I’m very excited to be here.”

The youthful Aces will welcome her championship experience, as Rodgers was a part of the Liberty’s Eastern Conference reign, and veteran leadership the club with the reigning WNBA Rookie of the Year A’ja Wilson can certainly use. She also brings a sense of durability and versatility after playing so many roles in her career, something she said she doesn’t mind.

“Throughout her career she’s been a starter, she’s been coming off the bench and I think that’s what makes Sugar valuable is it doesn’t matter to her if she’s starting or not, she’s still gonna come out every day and do her job,” Aces forward Tamera Young said. “She knows the exact spots to be in, she knows the great reads and that experience is great for what we need, especially with her ability to shoot the ball as well as she can.”

Said Laimbeer: “She understands her role coming into this situation, to come in and have fun, teach the young players all of her knowledge and contribute. Overall, she’s just a good person. On our team we have a lot of really good kids, so looking for somebody like them, that can give a little bit of guidance, Sugar was the right one.”

Beyond the court, the adversity Rodgers has overcome can also be invaluable, as she will provide strong front for her younger teammates and is a prime example of being able to succeed through hard times.

“I’ve been homeless, I’ve been robbed – all of that has created the woman that I am today, and without going through all those things, I wouldn’t be here,” said Rodgers, who brings career averages of 8.0 points, 2.8 rebounds and 1.7 assists to the Aces, along with an 82-percent free throw percentage. “I take one day at a time.”

The King’s Fork High School baseball team got its third win of the season with a 10-4 win over I.C.... read more