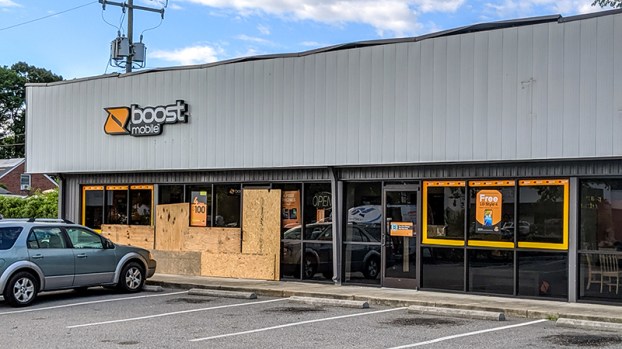 Donald Tonge, who owns Boost Mobile on East Constance Road, said the roof and windows to the store will have to be replaced due to damage.

When he returned to the store Monday morning to assess the damage following Saturday’s EF-1 tornado, he found a roof and shattered windows that will need replacing, but he was able to get the store open.

Throughout, Tonge said he had loyal customers checking on him and the store, and claims adjusters were at the store Tuesday looking at the roof, which will have to be replaced. He hopes he will not have to close during the process.

“I don’t want to shut down because then we lose our customer base,” Tonge said. “I can’t afford it, either.”

Nearby, at Harbour Veterinary Office, the only ones there at the time of the tornado were a pair of cats, and they weathered it unscathed in the back of the office, according to receptionist Pam Nix. A surveillance video it posted on its Facebook page showed the moment one of its two front doors blew out, with glass flying throughout the office.

Nix said the office was closed at the time, and it sustained damage to its roof as well, but it was able to open Monday.

“If I had been here, I’d have probably had glass go through me,” Nix said. “We had glass all the way in the back.”

Cindy Darden, a disaster program specialist for the American Red Cross, said a damage assessment volunteer was able to get out to damaged homes Sunday afternoon and offer aid. Four families accepted help from the Red Cross, Darden said.

For residents, they offered assistance for them to find lodging, or other supplies such as food and clothing to help families through the immediate aftermath. The Red Cross was able to get into neighborhoods around noon Sunday.

“We just give them some funds to get them through the first few days while they are recovering and exploring resources or maybe filing insurance claims,” Darden said. “There were quite a few people there who felt that they were self-sufficient and did not need our assistance.”

However, Darden said the Red Cross would still provide help for up to seven days after the event, in case anyone determines there is a need.

It also had snacks, water and Gatorade for first responders Saturday night following the tornado.

For a couple of days after the tornado, City Manager Patrick Roberts said Suffolk Police was an on-the-ground police presence in the neighborhood.

“Since that time, we’re just keeping our eyes on the neighborhood and the affected properties, and making sure nobody’s taken advantage of,” Roberts said.

The city deployed a blitz of staff from numerous departments — Suffolk Police, Suffolk Fire and Rescue, the Department of Emergency Management, Social Services, Public Utilities and Public Works, Planning and Community Development, Economic Development, Social Services, the City Manager’s Office and Media and Community Relations — to aid in the tornado’s aftermath. Some, according to city spokeswoman Diana Klink, worked around the clock to ensure continuous emergency assistance while keeping residents informed.

“They did a phenomenal job,” said Mayor Linda Johnson. “They were ready, and they were on it. We’ve seen it, and we’ve seen it even worse.”

Roberts said the coordination among city departments and outside agencies and organizations in the aftermath was seamless.

“I think everybody did the right thing, and we had an overwhelming positive response by our first responders — police and fire — as well as neighbors checking on people,” Roberts said. “It was a team effort, (with) everybody involved.”

Plain-clothed detectives normally out working cases transitioned into incident command and site control and site safety Saturday night, and fire prevention staff shifted into an emergency management and damage assessment roles. That’s something Roberts said is part of the city’s plan for a tornado or similar event. It all underscores the need for everyone to be prepared, he said, and it’s a good rehearsal for the big event no one wants to happen.

“We were so fortunate that we didn’t have (injuries),” Roberts said. “When you look at the force of the winds, the force of the storm, the damage that occurred to private property and the trees, we could have had some injuries or worse.”

Suffolk Police are investigating a shooting that happened Sunday in the Great Dismal Swamp. The shooting was reported at 2:40... read more