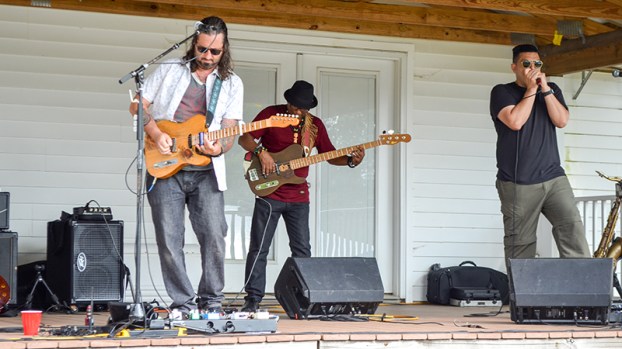 Anthony Rosano and The Conqueroos perform live at “Beers, Bands and BBQ” held on Saturday at the C.E.H. Ruritan Hall on Eclipse Drive.

The turnout for the Crittenden, Eclipse and Hobson Ruritan Club’s 19th annual “Beer, Bands and BBQ” may have been dampened by the rain on Saturday, but that didn’t stop visitors from having a good time.

Some simply came prepared, like Morgan Montague and her friends. Montague brought brightly-colored umbrella hats so that she and her friends could stay dry between bites of barbecue and sips of beer.

She said the beer was great and the music was even better.

“It’s been a great time,” Montague said under her umbrella-wear. “This is our first year coming here, and I’ll definitely be back.”

Anthony Rosano and the Conqueroos played on stage as visitors filled their cups at the beer truck and enjoyed each other’s company under tent cover. There were breaks of sunshine during the Saturday afternoon drizzle — ample opportunities to get another plate of food.

C.E.&H. Ruritan Club member and “Beer, Bands and BBQ” coordinator Chris Old said about 300 tickets had been sold for this year’s event, which was less than ideal. The rain hurt their numbers this year.

The club holds events like “Beer, Bands and BBQ” and its annual oyster roast in order to raise money for local organizations and charities.

“I think people are having a good time, but the more community support we have, the better,” Old said. “The money we raise goes back to the community. That’s what it’s all about.”

Melinda and Scott Tucker came out to see Anthony Rosano perform and were not disappointed. Between Rosano, the beer truck and the Ruritans handing out plates of barbecue and side dishes, they were more than satisfied with their experience.

Even the weather wasn’t too much of a bother for them.

“The temperature’s been fine, with just a little bit of humidity,” Scott Tucker said. “Other than the rain, we’re good.”

A contractor will perform a sanitary sewer lateral replacement at 112 N. Main St. Friday through Sunday. This work is... read more