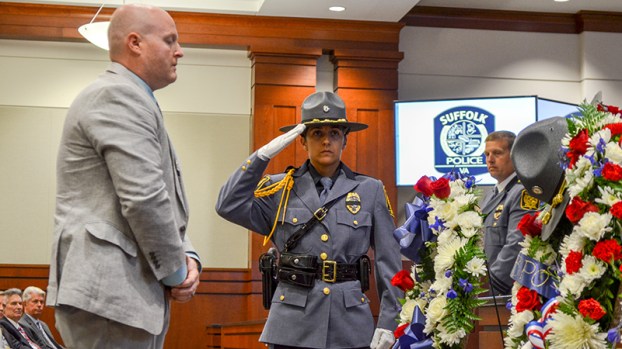 Suffolk Police Det. Christopher Scherer places a rose in a wreath during the Law Enforcement Memorial Service on Tuesday for Suffolk Police Officer William Andrew “Drew” Henley, who died in March 2005 in the line of duty.

“The wicked flee when no man pursueth, but the righteous are as bold as a lion.”

This scripture can also be found at the National Law Enforcement Officers Memorial in Washington, D.C. It’s written under one of four bronze lions that stand guard over the park, watching over the names of law officers from throughout history — each one who lost their lives in the line of duty, Johnson said.

“Today we remember the lions,” she said during her remarks. “We ask that God’s face shine upon the lions that we have lost, and that he watches over those that guard us still each and every day.”

Officers, city officials, family and friends met at City Hall on Tuesday for the Suffolk Police Department’s Law Enforcement Memorial Service. Friday marked Peace Officers Memorial Day, and the week in which that date falls is recognized as “Police Week,” according to a city press release.

The memorial honored those in the Suffolk Police Department who gave their lives in the line of duty.

“We must never forget those that have fallen in the line of duty, and have made that ultimate sacrifice for our community,” Johnson said. “Their dedication, their professionalism, their ultimate loss. These are the things that we remember today that remind us of the important role that police officers play within our society.”

The keynote speaker was Dr. L.D. Britt, who was honored to speak about a community of men and women that face such “high stakes” every single day on the job.

“In my profession, surgeons like to say ‘we’re in a profession where we have higher stakes — there’s no other profession that has stakes this high,’ and I say you’re wrong,” Britt said. “You’re absolutely wrong. The profession where the stakes are the highest … is being a law enforcement officer, where you put your life on the line.”

The Suffolk Police Honor Guard performed the posting of colors, and bagpipes were played in a solemn vigil. Four roses were placed within a wreath to honor the four officers who have died in the line of duty as members of the Suffolk Police Department — Officer George T. Smith, Chief William E. Brinkley, Officer Joseph Pratt and Officer William A. “Drew” Henley.

Henley died in March 2005, after suffering a fatal heart attack during a foot pursuit of a suspect. He had been a member of the Suffolk Police Department for three years.

Henley is survived by his wife and four children. His rose was placed on the wreath by Suffolk Police Detective Christopher Scherer, who had served with Henley.

“You’re the keepers of the peace, the guardians of the law. But you’re also our neighbors, our sons, daughters, brothers, sisters, husbands, wives,” Johnson said. “It is most important that we keep that in context every single day.”

Rolling for the last time

Saturday was a bittersweet day for Sonia Thacker. As the volunteer coordinator for the Shake, Rattle and Roll car show... read more