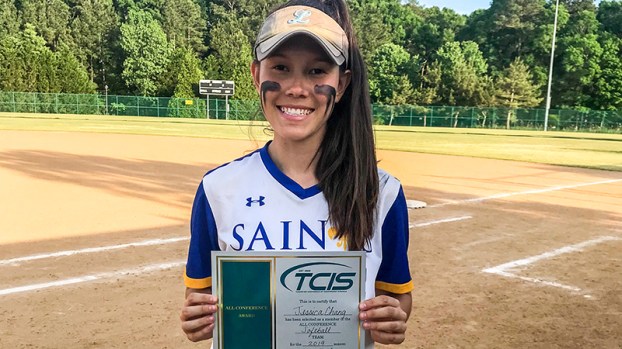 Jessica Chang was voted Suffolk-News Herald Player of the Week after a walk-off hit that secured a win for the Lady Saints softball team to advance to the conference championship game. She was first team All-Conference player this season. (submitted photo)

Jessica Chang was voted Suffolk-News Herald Player of the Week after a walk-off hit that secured a win for the Lady Saints softball team to advance to the conference championship game.

The Nansemond-Suffolk Academy softball team would go on to win the state championship last week, pulling off a 1-0 victory against Greenbrier Christian Academy. It was not a fluke, and NSA didn’t happen to be in the championship hunt by chance; it’s because of players like Chang and the rest of the team continuously putting in the work.

Even before getting to the state tournament, NSA made its way through a tough conference tournament. After rolling in the first round, NSA took on Norfolk Christian in the semifinals for a chance to play for a conference title. After being tied 4-4 going into extra innings, Chang hit a walk-off single that secured the win for the Lady Saints.

She sometimes knows in those big situations that her team needs her, and that motivates her to come through for them.

“I knew that my team needed me right then and there,” the junior Lady Saint said. “When I hit the ball, it felt great, but it felt even better once my teammates ran up to me to hug me. It just felt good being able to make everyone proud.”

Chang has enjoyed a strong junior campaign. She was a first team All-Conference player and likely to get an All-State nod as well. Before the season started, she worked hard and has seen the work pay off.

One of the things she improved on was becoming a consistent hitter. This season, Chang batted in the No. 1 spot, which has pushed her to keep her consistency up every time she steps to the plate.

“I put the work in during the summer with my hitting coach, and just coming into the season it felt like it was going to be a good year.”

Making the people around her proud is what motivates her when she is on the field competing. She has so much respect for her coach, Brittany Thornburg, that she always wants to make her proud every chance she gets. Thornburg and her assistant, Rudy Copeland, inspire her. They know a lot about the game that they have passed down to the players.

“Coach Brittany treats us as if we are one of her own,” Chang said. “So, making her proud is the best feeling. She and coach Rudy are always pushing me to be my best.”

Because of the higher standard NSA softball is held to, it has raised the level of play of Chang and her teammates. Chang is looking forward to an even better senior season.