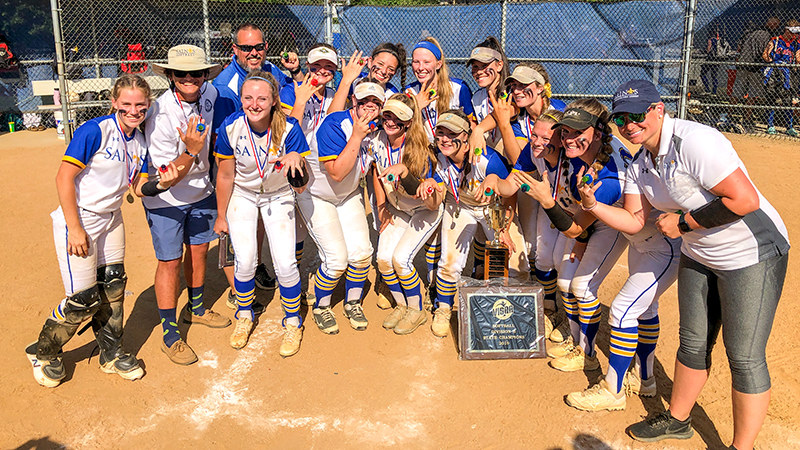 After falling just short of the state championship game the last few seasons, Nansemond-Suffolk Academy finally made it to the game and then won it this year. In Coach Brittany Thornburg’s first state championship appearance as coach of NSA, the Lady Saints pulled off a 1-0 victory over Greenbrier Christian Academy on Friday at RF&P Park in Glen Allen.

GCA had defeated NSA in the previous two meetings this season, but NSA took the matchup that mattered the most. The Lady Saints felt good about what they were able to accomplish the in the state tournament, avenging two losses.

“I’m just so proud of these girls,” Thornburg said. “They’ve worked so hard, and we were finally able to get it done. It’s an amazing feeling.”

After the game was scoreless through the first four innings, with each team refusing to give up an inch, the Lady Saints broke through in the fifth inning. Jessica Chang scored the game’s only run in the fifth. She finished the game going 2-4 with a run and a triple. Addy Greene went 2-3 from the plate with an RBI. NSA had six hits to GCA’s four.

“From the first inning, we left our hearts on the field,” Chang said. “We knew how much this game meant, and we gave it 100 percent. It was an all-around team effort, and it felt so good to reach our goal.”

Madison Inscoe pitched a complete game, striking out four to get the win in the circle. Inscoe helped pitch two shutouts in the win over Isle of Wight in the semifinals and the win over GCA in the championship. She said she was nervous at times on the mound but knew she could count on her defense.

“I always want to help my team win in any way that I can,” Inscoe said. “It felt great to help lead us to our first state title. I knew my defense had my back, and they made amazing plays keeping them from scoring.”

NSA finishes their season with a 21-7 record, and with no seniors this season, the Lady Saints will be returning an experienced and talented roster.