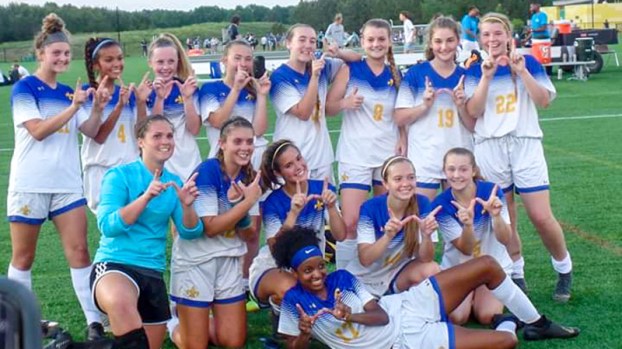 The Lady Saints advanced back to the state title game for a second straight year. They took a 3-0 loss to Highland School but are likely to return the same team next year. (submitted photo)

For the second straight year, the Nansemond-Suffolk Academy’s girls’ soccer team advanced to the state championship game but fell to Highland High School.

The Lady Saints’ strong state tournament run it came to an end Saturday in the Virginia Independent Schools Athletic Association Division II state championship. The Lady Saints took a 3-0 loss to Highland School for the second year in a row.

Mallory Mizelle had seven saves during the game.

Leading up to the game, the Lady Saints were able to take care of Seton School and Covenant School in the quarterfinals and semifinals of the state tournament. NSA earned the No. 3 seed in the tournament and, even with the loss in the state championship game, finished with a 14-3-3 record.

NSA will have a chance to make a run at the state title once again next season, as the entire team is expected to return. The Lady Saints had no seniors this season.