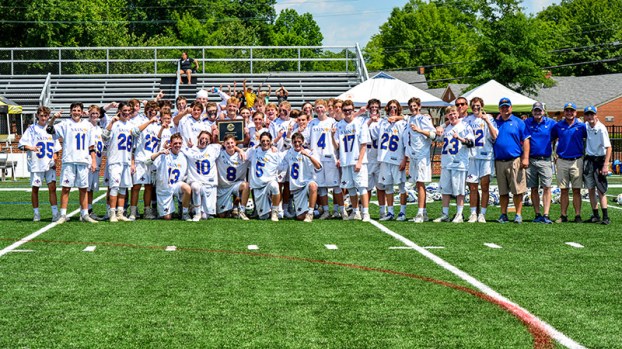 The Nansemond-Suffolk Academy boys’ lacrosse team won its first state title in school history with a 10-6 win over Christchurch School on Saturday.

For the second time this season, they defeated Christchurch. Tal Yeatts led the Saints with five goals in the championship game. Adam Soper won 14-19 face-offs.

The boys’ lacrosse program at NSA started in 1987. Coach T.W. Johnson and his players were excited they were able to make history. This was NSA’s third appearance in the state title game, following 2001 and 2014, but the Saints were finally able to win it all in 2019.

“It feels wonderful to be bringing our first state championship back to NSA,” Johnson said. “This was a special group of players, and no one cared who got the credit.  They just wanted to win the state championship.”

After falling just short of the title game last season, the Saints felt they had as good a chance as anyone to win it this year. Johnson wanted the team to be playing its best when the state tournament rolled around, and that’s exactly what they did. The players felt they saved their best for last, as well.

“I’m really proud of our players for playing their best during the most important week of the season,” Johnson said. ” The team had a great run this week. I’m pretty sure we were never trailing the whole week.”

“I’m just so proud of this entire team,” junior Simon Dowd said. “Everyone stepped up at the right time to help us on our championship run. We knew what we needed to do, and we trusted each other and let our hard work take over.”

After having numerous seasons falling just short of the state title, Johnson believed the Saints were going to break through sooner or later. NSA had been consistently good for so long that Johnson believed in time, the team would become great.

“We knew what we were capable of,” senior Will Wren said. “It just feels awesome, because we had this goal in mind all season, and to be a part of the first state championship team in history is incredible.”

NSA finished the season with a 14-7 record and was the No. 3 seed in the tournament.

After scoring five runs in the fifth inning, the Lady Bulldogs softball team picked up a 5-4 win over Lakeland... read more