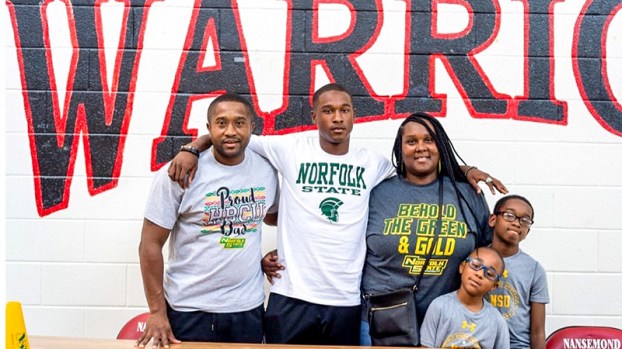 It was a long process for Johnson, but he decided on NSU after carefully considering whether he wanted to go to school for track or for football. Playing NCAA Division I football has always been a goal of Johnson’s since he was young.

“It was tough going through the process,” Johnson said. “I loved both sports so much, and letting one of them go was a heartbreaker, but I just knew I couldn’t let football down.”

For Johnson, the decision came down to his football choice, NSU, or his track choice, Virginia Commonwealth University. Johnson said the whole process was cool, talking with the NSU coaching staff about the potential plans they have for him. For the Warriors, he played both running back and defensive back, and he believes at NSU he will likely stick with defensive back.

“I think playing defensive back will be the best fit for me,” he said. “I played well there.”

Johnson finished up his senior season on the field in the fall, making All-District and All-Region. During his junior campaign, he was an All-State selection.

On the track, he was an All-American, national champion and state champion.