Inscoe poised in the circle 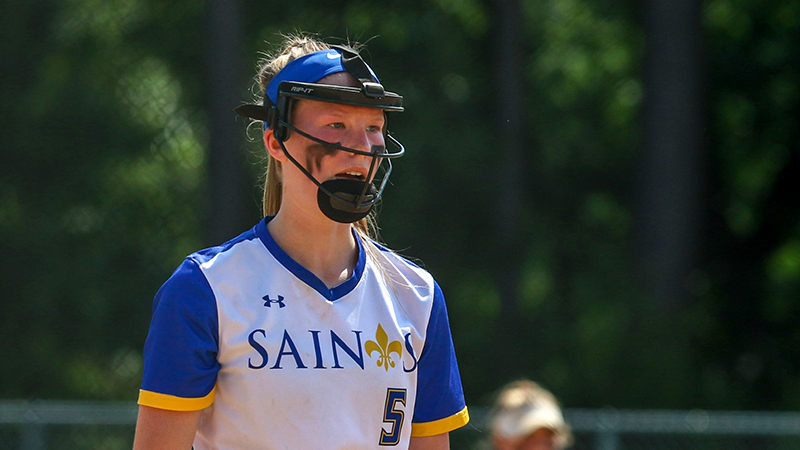 As a freshman, Inscoe has been able to achieve and be a part of things many freshmen don’t. A week ago, Inscoe was on one of the biggest high school stages and was able to come through for her team. The Nansemond-Suffolk Academy softball team won its first state title in more than 20 years, and Inscoe pitched the two complete games, needed for the Lady Saints to achieve a long-standing goal.

“Overall, I felt like I played well in those games,” Inscoe said. “Without my catcher and defense backing me up, I wouldn’t have been able to be as successful.”

There could have been a significant amount of pressure for anybody in Inscoe’s shoes last week, but she’s used to it. What helps her in pressure moments is remembering that every game is “just a game.” In 14 innings pitched between the state and semifinal games, Inscoe struck out eight batters. NSA defeated Isle of Wight Academy 2-0 and Greenbrier Christian Academy 1-0 in the title game.

“Throughout my career, I’ve always been put in pressure situations,” Inscoe said. “It has become pretty normal to me. You have to trust yourself and what has got you this far.”

Her inspiration is drawn from her father, whom she calls her biggest supporter. They spend a lot of time together traveling, and he is always pushing her to be better.

“He never misses a game, ever,” Inscoe said. “There is no way I would be where I am now without him. He’s my biggest critic and biggest supporter.”

A week removed from the state title run, Inscoe still has that amazing feeling she had after helping the team win it.

“It feels great. We worked so hard for this,” she said. “All of it has paid off.”

Even though Inscoe was an All-Conference and All-State selection this season, she knows she still has room to improve. Next season, she already has her sights set on being a consistent hitter throughout the season. With NSA having no seniors on this year’s team, it is quite possible NSA could repeat as state champions next season. With the team being so young, the sky is the limit.