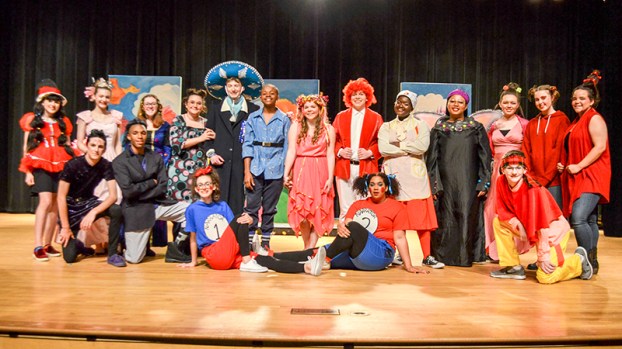 Oh, the places Shakespeare will go

Dr. Seuss will collide with William Shakespeare in a madness-inspired production by the King’s Fork High School Drama Club this Thursday through Saturday.

The KFHS drama club will perform “The Seussification of Romeo and Juliet” at 7 p.m. Thursday, Friday and Saturday evenings at the school, located at 351 Kings Fork Road.

Written by Peter Bloedel, the play is “a whimsical reinvention of Shakespeare’s tragic love story, complete with rhymed couplets, creative wordplay, and fantastical machines,” according to playscripts.com.

“Witness the journey of these two star-crossed lovers as they encounter self-speaking horns, plaid quacking yaks, and a plethora of bumballoons,” English and theater teacher, drama coach and director Reanna Langert wrote in an email. “Set in the land of Seuss and the imagination of our cast and crew, this show is a great sight to see for all ages.”

The students are dressed Seuss-appropriate with students Reisce Owen and Johanna Athey as Narrator One and Narrator Two — a la Thing One and Thing Two — setting the stage for drama between the school’s Montagues and Capulets.

But Shakespeare’s writing shines through the grim proceedings thanks to characters’ enthusiastic antics.

“This makes it more like a children’s storybook,” said KFHS junior Chelsea Shaul, 17, who will play Juliet. “It’s much more light-hearted.”

“It gives the show a musicality and colorfulness to it that adds to that childlike element,” he said.

Audiences can expect eye-catching costumes and laugh-out-loud antics that will delight all ages. The cast and crew have put their own artistry into this combination, resulting in a mix of Shakespearean prose, Seussian rhymes and the humor and talent of the KFHS Drama Club.

“You’re going to see a lot of artistic freedom with this show,” Chelsea said.

These students are also hoping to raise enough money to fund their dream of performing a musical for next spring’s production, Langert wrote.

“My students have been extremely brave, hard-working, talented and I’m so proud of all of them,” she wrote.

“The Seussification of Romeo and Juliet” will be performed at 7 p.m. on Thursday, Friday and Saturday at King’s Fork High School, 351 Kings Fork Road. General admission tickets are $5 and concessions will be sold during intermission. Carnations will also be available for $1 to give to your favorite cast or crew member.

A stretch of Pruden Boulevard that had been closed for more than three months due to drainage work reopened Friday.... read more