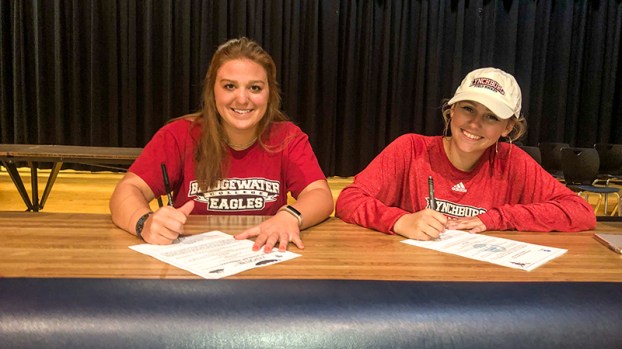 Lakeland High School seniors Allison Thompson and Darcy Kilgore have signed Letters of Intent to play field hockey at the next level.

In a signing ceremony Thursday afternoon, Thompson and Kilgore made their college commitments official. Thompson, who committed in the fall, officially signed to play at Bridgewater College. Kilgore signed her Letter of Intent to play field hockey at Lynchburg College.

Thompson committed verbally back in September of 2018 after developing a relationship with the coaches. Since she started playing five hockey at the age of 5, she had always wanted the opportunity to play in college.

“I really feel great about it,” Thompson said about officially signing. “I have gotten to know my teammates more and more, and they have been welcoming. I already feel like it’s home.”

Kilgore chose Lynchburg after going to different college tournaments and competing, and her play sparked the coach’s interest. She eventually went up to Lynchburg for an overnight stay and realized how much she loved it.

“It just felt right, and I knew it was going to be my home for the next few years,” Kilgore said of Lynchburg. “After my overnight stay, the coach asked me to commit, and I immediately said yes.”

Kilgore said she never imagined she’d be playing in college. Coach Cortney Parker was one of the people that pushed her to be a better player and encouraged her to play travel field hockey to get looked at more. Her parents also always believed she had the ability to play in college.

“I am very excited about what’s ahead,” Kilgore said. “Just talking to the coaches, they feel like the type of person I was, in general, was someone they wanted on their team.”

In their time at Lakeland, Kilgore and Thompson both were All-Conference and All-District selections.

The Lakeland High School girls’ soccer team is headed to its second straight regional semifinal game after a win over... read more