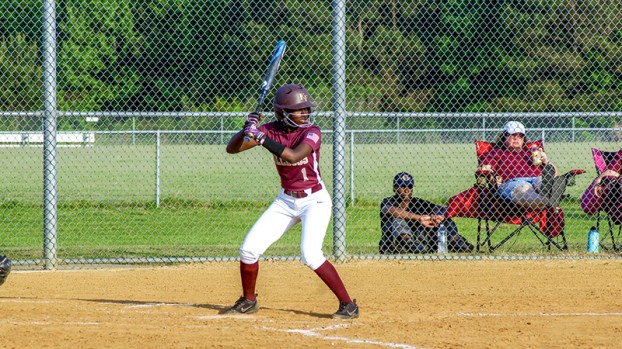 Amaya Allen went 2-4 with a run in the Lady Bulldogs win on Monday. They will face Great Bridge High School Wednesday in the Class 4 Region A semifinals. (Caroline LaMagna Photo)

With a win over Warhill High School in the first round of the Class 4 Region A tournament, the Lady Bulldogs softball team advanced to the regional semifinals.

The King’s Fork High School softball team kicked off the region playoffs with a 2-1 win over Warhill Monday afternoon. It was a solid win for a King’s Fork team that came from behind 1-0 to win.

Coach Tom Hinnant felt like his team was poised and was glad to able to see them push through.

“They battled the whole game,” he said. “They played together, and for each other. It was really amazing.”

Cali Hinnant handled pitching duties on the mound, striking out 10 batters. From the plate, Amaya Allen went 2-4 with a run, while Baxley Lockhart had a hit and a double. Haley Cisco scored the winning run on a passed ball.

King’s Fork will now face Great Bridge High School in the region semifinals. Hinnant felt the girls finished the season strong and that their record didn’t indicate the type of team they were. They feel good about their chances Wednesday evening but know it may take a near-perfect game to get a win.

“We’ll have to be flawless,” Hinnant said. “They are one of the top defensive teams in our region. They’re not going to make mistakes, and we are going to have to match that. We can’t have any errors.”

Both teams have met twice this season already, with the Lady Bulldogs losing both matchups. King’s Fork lost 14-0 in the first meeting but lost by only 3-0 in the second meeting. Hinnant believes after Monday’s win, the team’s confidence is high. If the Lady Bulldogs win Wednesday, they get a bid to the state tournament as well as the region championship game.

“They are looking forward to the challenge,” Hinnant said. “I think they know the opportunities we’ve left on the field the last couple of times we have played them, and I believe the girls will be ready to go.”

King’s Fork will play at Great Bridge at 6 p.m. Wednesday.

NR shut out in regional loss