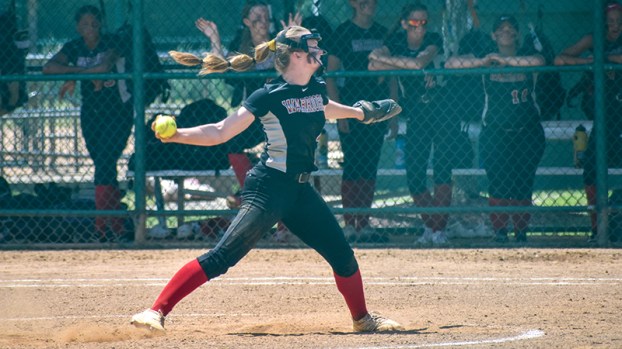 Taylor Cherry struck out seven in a complete game on the mound against Menchville High School during Monday’s regional semifinals loss.

NR shut out in regional loss

The Nansemond River High School softball team took a 2-0 loss to Menchville High School in the Class 5 Region A semifinals.

The Lady Warriors softball team went 1-1 in the postseason before their season came to an end Memorial Day afternoon.

In the first round of the region tournament over the weekend, the Lady Warriors defeated Warwick High School. During that game, Taylor Cherry pitched a full game, striking out eight batters, and had a perfect game going through four innings. Toni Jones and Misty Even added home runs during that game.

From there, Nansemond River went on to face the No. 2 seed in Menchville. Both teams got strong performances from inside the circle, with Cherry once again doing the bulk of the pitching.

In the third inning, Menchville had two runners on base when a throw from home plate to first base got away from the Lady Warriors. Menchville was able to capitalize, bringing home both runners. Outside of that inning, Nansemond River was able to keep the No. 2-seeded Lady Monarchs contained. However, the Lady Warriors couldn’t muster up enough offensively to tie the game, ending their season.

Cherry finished the game striking out seven. Skylar Scott had the only hit for the Lady Warriors.

The Nansemond-Suffolk Academy girls’ lacrosse team has two players selected to the All-State teams. In their second season back, the... read more