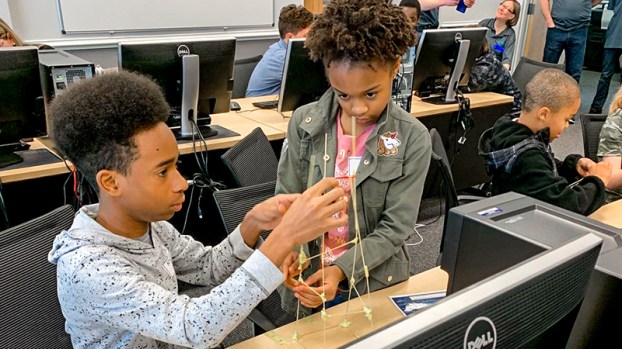 More than 30 students and 20 parents from Suffolk’s five middle schools participated in the Digital Shipbuilding “STEMpowerment” program, which was hosted by Old Dominion University’s Virginia Modeling and Simulation Center in late-April. (submitted photo)

More than 30 students and 20 parents from Suffolk’s five middle schools participated in the program, which was hosted by Old Dominion University’s Virginia Modeling and Simulation Center.

Suffolk students, parents and staff were engrossed in digital shipbuilding during the workshop with a hands-on tour, workshop rotations, simulations and the “Up Against the Wall” engineering team challenge.

“The goal of the workshop was to expose students at an early age to maritime industry engineers, architects, shipbuilders and trades through the integration of virtual reality, augmented reality, 3D modeling/printing,” Suffolk Public Schools Coordinator of Career and Technical Education Andre Skinner wrote in an email.

Most of these skills are developed through gaming technology, he added.

“Students received hands-on exposure to the integrative technologies being utilized and learned various exciting career pathways associated with digital shipbuilding, along with the advancement of technological tools that are now used throughout the engineering design process,” he wrote.

Parents were given tips to engage their “digital natives,” and also career pathway options and ideas on STEM projects and programming.

“It was amazing to see the students’ cooperation, (and their parents were also) blown away by (their) communication skills and collaboration skills,” Johnson said.

According to the press release, student teams created prototypes of an aircraft carrier bulkhead and used multiple technologies and materials. This was after they learned background information about the digital innovations.

They collaborated and used their problem solving and critical thinking skills to engage in hands-on digital instructions and design their bulkheads. Teams had to consider aspects such as design, building, accessing components, measuring and replicating the 3D models of their bulkheads.

The final prototypes were evaluated using online inspections and an engineering design rubric.

“The wonderful thing was to see how engaged the students were,” Johnson said. “This was a very challenging task that we gave them, and they were able to rise above it and work as a team.”

Audrey Page and her 12-year-old daughter Diara were emotional as they came to the Albert G. Horton Jr. Memorial Veterans... read more